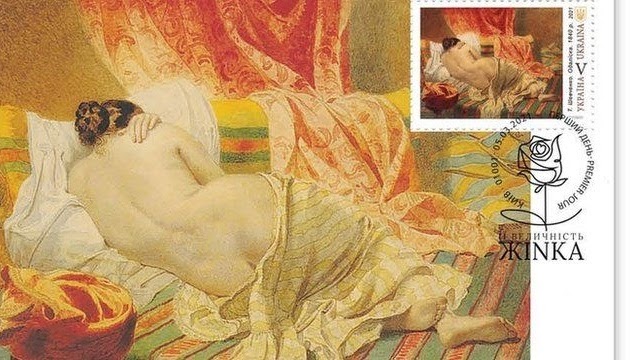 Ukrposhta has presented the first collection in Ukraine of mail staps in nude style from the series “Her Majesty – woman”.

Mail stamps in nude style are very popular, especially abroad. “Ukrpochta was planning to launch such a project for some time and finally, after long discussions in experts’ circles, the project was launched. Paintings in Nude style were thoroughly selected by members of the board of “Ukrpochta” “ – said Natalia Mukhina, the head of the philatelist production department. The first collection represents Taras Shevchenko paintings “Odaliska” from National Taras Shevchenko Museum and “Energy II” by a modern Ukrainian artist Andrey Chebykin. The first circulation has over 130,000 pieces of each painting.

Moreover, “Ukrpochta” in a collaboration with a Ukrainian clothing brand OLIZ represented a series of silk female scarves. The design is developed in Taras Shevchenko’s painting style. “Our scarves are created with love to Ukraine and art. The Ukrpochta and OLIZ Collaboration is an expression of this love and the way to once again stress the greatness of Taras Shevchenko as an artist” – says Khristina Zboroshenko, OLIZ brand founder. She said that 20% of the funds generated from mail stamps and scarves sales will be directed to the National Taras Shevchenko museum development and support.

The ceremony dedicated to stamps redemption was held at the Taras Shevchenko National Museum.

A Ukrainian artist George Narbut – the creator of “Ukrainian Abetka” has inspired the creation of a limited edition watch by the new Ukrainian watch brand HVILINA.

George Narbut was a “rock-star” of Ukrainian art at the beginning of the 20th century. He started as a self-learner, continued his education in Germany. He has illustrated Krylov’s and Hans Christian Andersen’s books. In 1917 he moved to Kyiv to join the Ukraine Academy of Art as a professor.

In 2014 a Ukrainian designer Dmitriy Rastvortsev has created a font called Narbutorum in the memory of George Narbut and his great cultural asset “Ukrainian Abetka.”

Taras Shevchenko monument is erected On March 9 in Florence, Italy.

The first T.Shevchenko monument erected abroad for the 30 years of Ukraine independence is created by a Ukrainian sculptor O.Pinchuk with a sponsor’s support. It is dedicated to the 207th anniversary of Shevchenko’s birthday.

Unlike how it is traditionally done, Shevchenko is depicted as a young man on this monument.

The monument to the memory of Florence poet Dante Alighieri was placed in Kyiv on Vladymyrskaya Gorka 3 years ago.