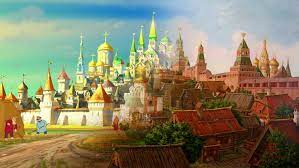 We collected historical evidences on Russia and Russians made by famous figures of world history.

Russian philosopher Ivan Ilyin: “Russia is the most vile, absolutely disgusting country in the entire history of the world. By the method of selection, monstrous moral freaks were brought out there, in which the very concept of Good and Evil is turned inside out. Throughout its history, this nation has been wallowing in crap and at the same time wants to drown the whole world in it”.

Russian writer Fyodor Dostoyevsky: “The people who wander around Europe and look for what can be wrecked, destroyed just for fun.”

French President Charles de Gaulle: “Russian people will never be happy knowing that someone lives better than they do. And since they are not capable of progress, anger and frustration are the constant state of mind of Russians.”

Russian writer Mikhail Saltykov-Shchedrin: “If the Russians are allowed to choose their leader, they choose the most deceitful, vile, cruel. They kill, rob, rape along with him and then blame him. After a while, the church proclaims him a saint.”

Russian writer Maksim Gorky: “The main feature of the Russian national character is cruelty, and that cruelty is sadistic. I’m not talking about individual explosions of cruelty, but about the mind, about the soul of the people.

Russian writer Alexander Solzhenitsyn: “There is no less trivial, degraded and boorish individual in this world than a katsap. Born in a Nazi country, nurtured by Nazi propaganda, this bastard will never become a Human. His country has no friends – either toadies or enemies. His country can only threaten, humiliate and kill. And for preservation of this status by Russia, an ordinary katsap is ready to sacrifice his own life, the lives of his parents and children, the quality of life of his own people. Truly: katsaps are animals. Fierce, bloodthirsty, but … mortal.

German philosopher Friedrich Engels: “Any seizure of territory, any violence, any oppression was carried out by Russia only under the pretext of enlightenment, liberalism, liberation of peoples.”

Russian historian Nikolai Karamzin: “The people who never knew and never spoke the truth are the people of spiritual and physical slaves. Miserable people.”

German philosopher Karl Marx: “Russia, which has nothing to do with Kyivan Rus and received, or rather, stole, its current name at best in the 18th century, nevertheless, brazenly claims the historical heritage of Kyivan Rus, created eight hundred years earlier. However, Moscow history is the history of the Horde, sewn to the history of Kyivan Rus with white thread and completely falsified.