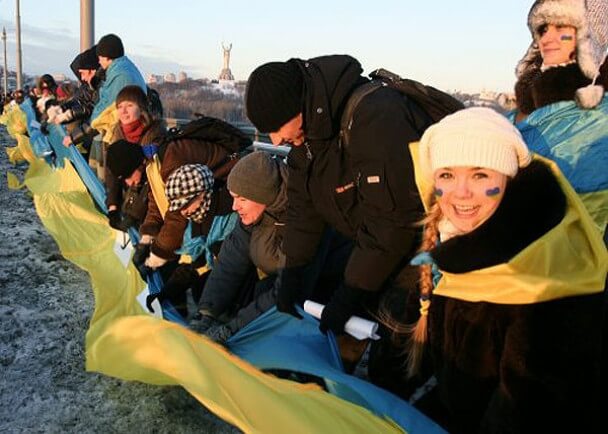 22 January, with its sovereignty threatened by Russian invasion, Ukraine will traditionally celebrate the Day of Unity. On the eve of this holiday, EMPR tells about its significance for Ukrainian people. The unified Ukrainian state, however, didn’t last long. Facing the fact of military catastrophe in autumn 1919 and in 1920, governments of both Republics were mainly concerned about their own regional interests.

In 1939, as a result of Soviet-Nazi conspiracy known as the Molotov-Ribbentrop Pact that divided, among other countries, the territory of Poland, the West Ukrainian People’s Republic became also part of the USSR.

On 22 January 1939, the Day of Unity of Ukraine was for the first time celebrated officially. The most significant and memorable action marking Ukraine’s Day of Unity took place on 21 January 1990, when anticipating collapse of the USSR Ukrainian patriots united to build human chain between eastern and western Ukraine.

This chain became a symbol of united Ukraine. According to the different estimates, 1-3 million Ukrainians joined their hands that day to create a single chain unifying Donbas, Kyiv and Lviv.

Since then, human chains became traditional element of celebrating the Day of Unity all over Ukraine.

This year, the Day of Unity acquired new significance, since Ukraine sovereignty is endangered by Russian invasion. People all over Ukraine will take their hands and build human chains once more to show their unity in the face of Russia’s aggression.