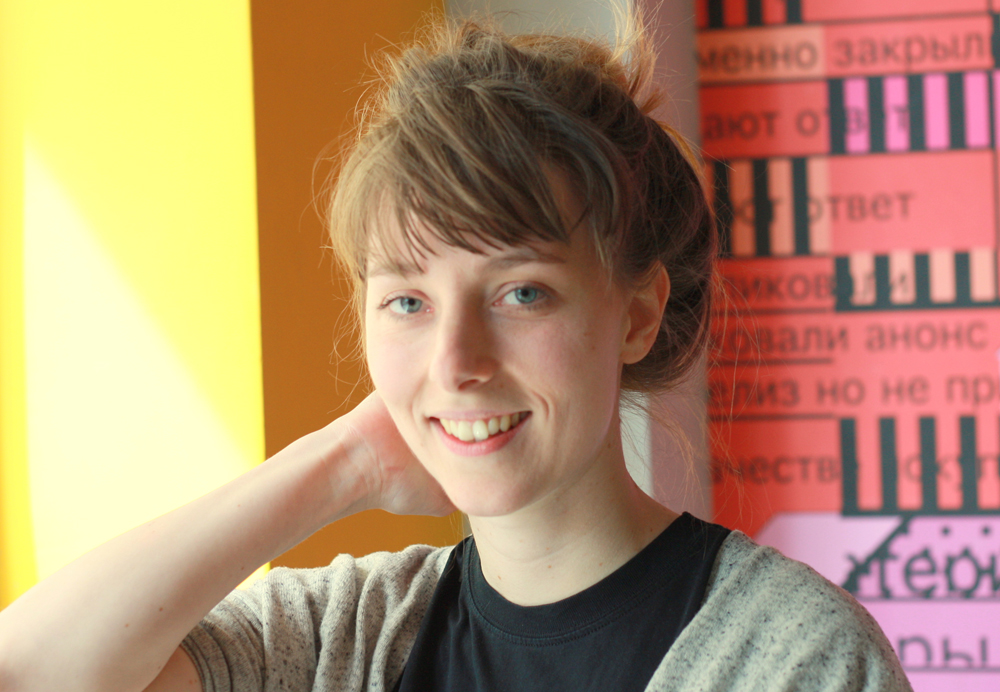 Réka Bucsi is a young animation filmmaker from Hungary. Her graduation work “Symphony no.42” has a vast list of festival achievements that include entering the Academy Awards shortlist in 2014.

More than that Réka has already got a very distinctive artistic language. Her second film “Love” was premiered in early 2016. EMPR meets Réka at the Kyiv International Short Film Festival where she’s a jury member.

Réka Bucsi’s 10-minute film “Symphony no. 42” was in the selection of shorts that opened the festival in Kyiv in April 2016. The film was released in 2013 and is the filmmaker’s graduation work. Bucsi born in 1988 studied animation at the Budapest-based Moholy-Nagy University of Art and Design. “Symphony no. 42” has several notable awards and selections to festivals worldwide including selection to Annecy and Berlinale as well as the Best Animation Short award at the Melbourne International Film Festival that made “Symphony no. 42” eligible for the 87th Academy Awards shortlist.

Reka’s second film “Love” released in early 2016 was showcased as part of the Kyiv International Short Film Festival’s animation block. The work immediately strikes with a peculiar visual language and distinctive narration manner. “I am trying to experiment,” says Reka explaining that she was in try to move away from the classic way of storytelling. The short film is divided into three sections: longing, love and solitude. The world of “Love” is inhabited by panthers, horses, fantasy sea creatures and plants. Each species has its own pattern of behaviour and its own story unfolding in each of the film’s chapters. The dreamlike characters of the film and unpredictable paths they follow result in artistic images that might seem unusual in form but are witty and understandable when it comes to their perception. The film’s experimental language appeals to the audience’s feelings and emotions and thus succeeds to transmit clearly the ideas that sometimes get lost in more traditional artistic forms.

“My film is pretty straightforward,” says Réka during the questions-and-answers session that follows the screening of the film at the festival. “It is about capturing something that you feel. The idea is to give you the general feeling through this world that I make,” explains Bucsi. The film director adds that her work does not have a particular personal story behind it: “I was not going through a breakup or anything like that,” she says adding that her principal motive was to explore the notion of love. Réka says it took her one year in total to get the film ready, six month of which the artist was exploring and settling the rhythm of the film. “I start from details, then it becomes something bigger – [the film gets] composition and the rhythm of movement,” the filmmaker says. She adds that working with sounds and music is an important part of the process from the very beginning. Réka notes that she is quite flexible when it comes to following the original storyboard. While research and work over the characters is an important part of the filmmaking process for her. As soon as she finds a character that she likes she starts developing it further thinking what its actions and behaviour might be like.

At the festival Réka Bucsi also presented a lecture during which she shared her experience and gave some tips to Ukrainian colleagues on how to get financing for an animated film and how to best arrange the work process. “Love” was co-produced and co-financed by the French-German channel ARTE, French and Hungarian state-funded institutions: CNC (the National Center of Cinematography and the moving image, France) and the Media Council of the National Media and Infocommunications Authority (Hungary).

According to Réka the fact that her first film “Symphony no.42” was shortlisted for the Academy Awards helped her get financing for her second film “Love”. The filmmaker adds that film financing in Hungary is often a non-transparent and corrupt process making it thus quite hard for young graduates to get funding for their projects. The situation within the French film industry and in the animation sector in particular is different. Opportunities are abundant while the “competition is huge,” Bucsi says adding that working hard and being proactive in promoting the work is crucial to success. “It was hard to apply for the French money,” the young film director confesses. She says she often had to present her work adapting it to the expectations of an organization or authority which she was applying to. However she managed to stick to her original artistic idea while working over the film.

Among the other tips that Réka gave her Ukrainian colleagues is to use each and every opportunity to present and distribute the information on their work and especially on the success and awards they might be getting. She said the role of social media in this process is crucial emphasizing such platforms as Facebook, Tumblr and Vimeo. “Get to know your community, share your work, get out to festivals and workshops,” the filmmaker advised.

“Love” was released in early 2016 just a few months ago however Réka already has some ideas for her next project. She said she is thinking of a full-length film but needs some more time to get away from the characters of “Love”.