Home Culture Movie “Olga”, a film awarded at Cannes that tells a story set against Euromaidan premieres in Ukraine

“Olga”, a film awarded at Cannes that tells a story set against Euromaidan premieres in Ukraine 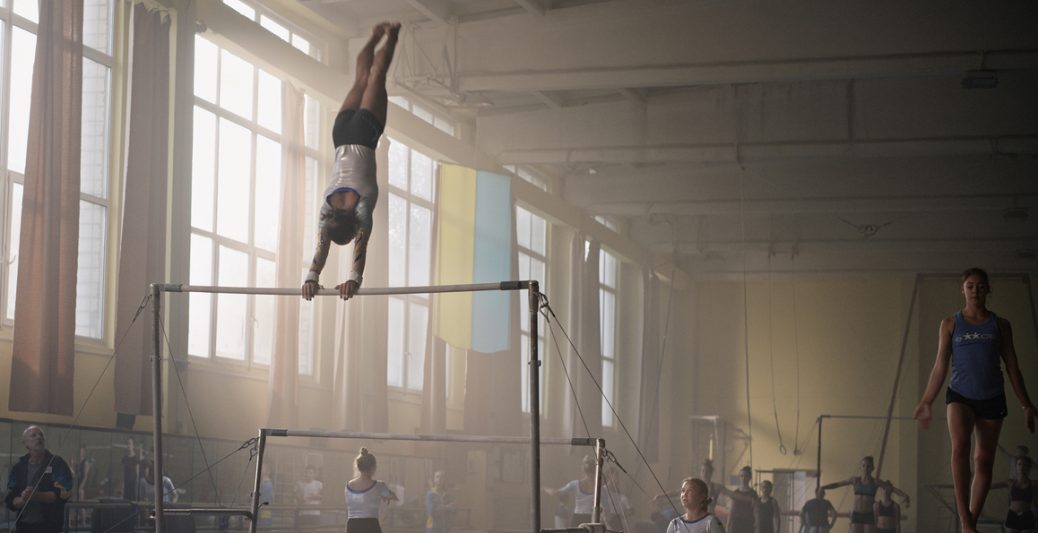 “Olga”, a feature-length fiction film directed by Elie Grappe received the SACD Award for best screenplay at the 60th Semaine de la Critique (Critics’ Week), a section of the Cannes Film Festival. Co-produced by Switzerland and France, the film tells the story of a 15-year-old Ukrainian gymnast who trains in Switzerland while her thoughts are with Ukraine where Euromaidan begins.

The screenplay was co-written by Elie Grappe and Raphaëlle Desplechin. The film is currently making festival rounds. In August, it screens at the film festivals in Karlovy Vary and Odesa.

UA: CULTURA: Elie, why did you decide to tell a story about the Revolution of Dignity or Euromaidan?

Elie Grappe: After I graduated from the university in 2015, I was directing a documentary about conservatoire orchestras, a subject I was well aware of. It was at that time that I met Ukrainian violinist Iryna. She came to Lausanne shortly before Euromaidan began. She told me that story.

A story similar to the one in your film?

Yes, largely similar. At that time, I was asking myself political questions, I was worried by what she told me about the revolution. I was wondering how the information, the news she was following, and all the images you could find on the Internet, was penetrating her life and impacting her.

Is that what made you knowledgeable about Ukraine’s modern history?

During Maidan, I followed the events in the news, but that was from afar. Later, when I started working on the project, I surrounded myself with a lot of Ukrainians. Some of the important people were sociologist Yulia Shukan, producer Artem Yurchenko, and producer Sashko Chubko to whom I owe meeting a lot of people who were in Maidan. That was very important for the development of the film, so that I could show Maidan from the best perspective instead of only giving my Swiss-French viewpoint on that.

Why did you choose to focus on the revolution in Ukraine, not the war years?

The revolution is still relevant today. It made Yanukovych flee the country, and that had many consequences for the country. I wanted to focus on that time period and show it in detail.

There is an episode in the film, in which one of the Swiss characters speaks of the Ukrainian revolution as a violent riot. Is that how Swiss see it?

In an episode, I wanted to show how distant from reality can Swiss be. Some people, like the trainer care about Olga, they worry about what is going on in her country. While her family in Switzerland does not understand how important that is, how significant the solidarity movement is that brought together people from everywhere and from different political sides. I wanted to show how different the attitudes can be.

The main character, Olga is a young Ukrainian athlete who speaks Russian, why is that?

The answer is simple: she was born in Luhansk. Her mother, Tania Mekhina was born in Mariupol and speaks Russian. I wanted the characters to use their usual language and words, and to have genuine reactions. It would have been difficult both for me and for them, had they spoken a language they are not fluent in.

That was also a way to say something about that time period. For example, in Kyiv, some people speak not only Ukrainian, but also Russian.

Sometimes, they also speak surzhyk (a blend of the two languages – EMPR). I filmed an episode in which Olga and Sasha speak surzhyk, they sometimes speak this particular language to each other. That’s the whole story of coexistence of languages.

Some scenes of the fiction film look like documentary. Was it intentional?

While filming gymnastic competition and training we had to show the rhythm. So we had to adapt a fiction film to training in real time. The documentary part is also represented by archive footage of Maidan. It was important to show real Maidan instead of recreating false barricades.

Is Anastasia Budiashkina who stars as Olga a non-professional actor?

She is a non-professional actor, she is a gymnast. Working with gymnasts was important, as they have the experience, they know what it is like being secluded from the rest of the world while training 30 hours a week, and being watched by thousands at the championships.

That was important to let them show their characters, add brightness and sometimes ambiguity. Anastasia did incredibly great, she was so brave on the set. She actually surpassed the character that I wrote and imagined. She made the character more vibrant.

Was it difficult to work with a non-professional actor in a fiction film?

No, it would have been more difficult to work with professional actors and ask them to do gymnastic exercises. It was easier to work with people who have athletic experience. As a film director I have learnt a lot from working with them.

In an opening scene and throughout the film, Olga is wearing a hoodie with the logo of the Ukraine Cup of aesthetic gymnastics in Luhansk. Was that a link to what happened later, the occupation of Luhansk?

Sure. Anastasia is from Luhansk, that’s her native city. The film encompasses the time before Euromaidan, and we know what now happens in Luhansk. That was a way to bring a perspective into her story. I anticipated the questions on Ukraine’s identity, so that was a way to put it into the context.

I would like to explain, the Ukrainian State Film Agency rejected the funding request for the film. That’s how it happened that in a film that speaks about Ukraine, Ukraine is not mentioned in the credits. That’s regrettable.

It is, but I also understand that Ukrainian film production requires more investment. I am not getting upset because of that.

In Ukraine, you worked with a Ukrainian film crew. Was it difficult to work between the two countries?

In Ukraine, we were lucky to work with a talented team. The film crew, and the technicians we worked with are incredible professionals. I would like to use this opportunity to say to them: “I sincerely thank you for your work”. Yet the film was mainly shot in France and Switzerland.

I would like to ask a difficult question. In an interview with “Variety”, co-founder of Pulsar Content, a sales company that distributes your film said: “Grappe is highly knowledgeable about the Ukrainian civil war and he was able to weave some striking archive footage of the revolution into his film.” I would like to know your take on that. Do you think that Ukraine is fighting a civil war?

No. It must be a misunderstanding. My film is not about the war, but about what happened before the war. It captures the moment of the revolution and speaks of the main character’s relations with others at that time. Naturally, I had to make a research of what happened next, in the East and in Crimea. But I would by no means claim that I know those events better than Ukrainians.

I had to ask you about that quote, because you made a powerful film about Ukraine. Do you agree that the war we fight is the war with Russia? Or do you see it differently?

Of course that’s the war with Russia. It’s obvious to me that Russia has occupied Crimea, and there’s a war in eastern Ukraine.

You made an outstanding film that premiered at the Cannes Film Festival. Will you work again with Ukrainian film professionals, and make films about Ukraine?