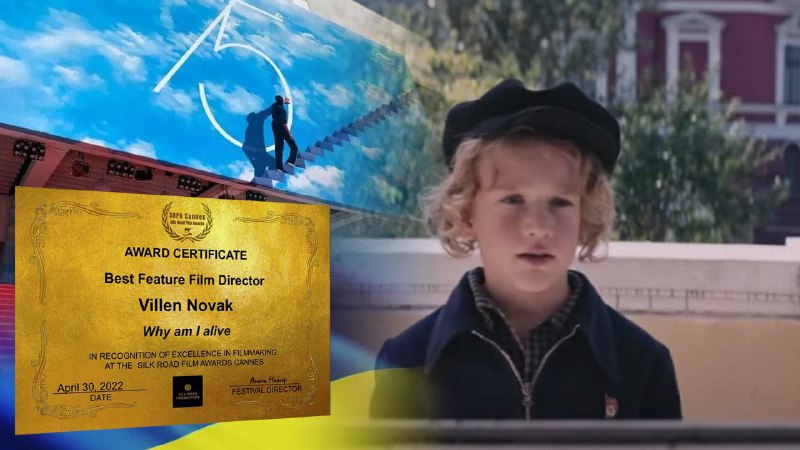 The film Why Am I Alive by Ukrainian film director Villen Novak won the Best Feature Film Director nomination at the Silk Road Film Awards-Cannes.

This was reported by UNN citing the press service of the Odesa Film Studio.

“The film Why Am I Alive of the Odesa Film Studio (directed by Villen Novak) won the Best Feature Film Director nomination at the Silk Road Film Awards-Cannes.”

The Silk Road Production Association (ASRP) was born in Cannes in 2019. ASRP’s objective is to promote cinema and music professionals mainly from the Silk Road countries and from around the world. Its founders are also interested in the widening of the boundaries of the Silk Road project, with the aim of developing international cultural exchanges with France; the organization of two independent film festivals: Cannes International Independent Film Festival (CIIFF) and Silk Road Film Awards-Cannes (SRFA).

This is the third victory of the authors of the film “Why Am I Alive” in a month. Earlier the film won the Best Drama Feature Film nomination at the Turkish Film Festival and the American Hollywood Gold Awards.

The plot of the film “Why Am I Alive” is based on real events that took place in the pre-war 1940s and in the following years in Mariupol.

“Seventeen-year-old Frosya and Lyonchyk dream of getting married. But since Frosya is Ukrainian and Lyonchyk is Jewish, a girl’s father finds it very difficult to be related to such a family. Oleksiy Ivanovych is a good man, albeit a peculiar Orthodox believer. How can he give up his beliefs and let a non-believer into his family? Frosya’s pregnancy. The first day of the war. Lyonchyk goes to the front. Occupation, denunciations, collaborationism, looting, fascist terror, executions of Jews … The heroes will have to go through all this and remain real people,” the Film Studio press service notes.

The film “Why Am I Alive”, which was released nationally on November 4, 2021, won two international film festivals – FUTURE OF FILM AWARDS and Europe Film Festival, won the Grand Prix of the 10th anniversary International Film Festival “Cinema and You”, and was also recognized as the best feature film at the Future of Film Awards in Northern Macedonia.

Tags: movie villen novak why am I alive
Share this
0 likes
Related Articles