About today’s provocation in Donetsk 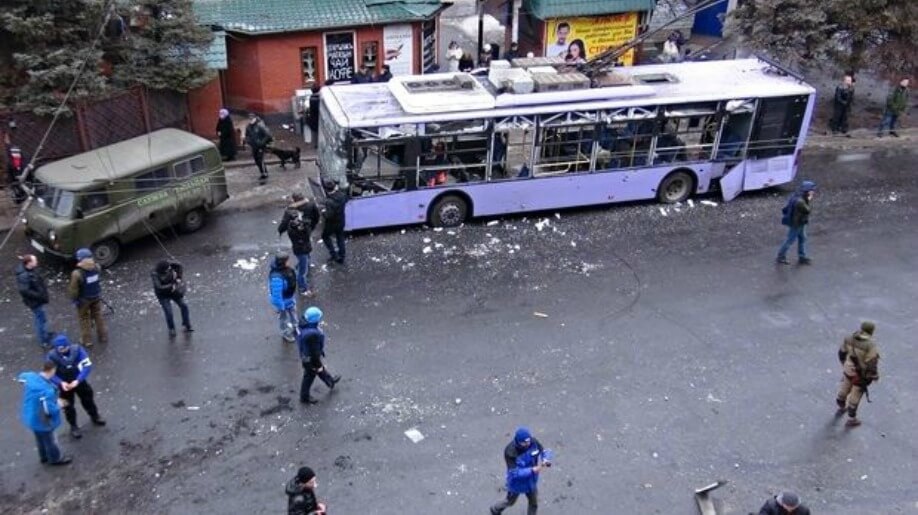 The deaths of civilians in Donetsk on January 22,2015 are an answer to the tragedy in Volnovakha from Putin and the Russian propaganda machine, admits Interior Minister Advisor Anton Herashchenko in his blog on espreso.tv

Here below read his view on another mass murder of Ukrainian citizens in the conflictz zone in eastern Ukraine.

(1) It is evident that the explosions that led to the deaths of our fellow-citizens were caused by low powered ammunition. The small craters left by the explosions and the fact that the trolleybus itself was not rocked by a strong shock wave plus the absence of dents in the body of the trolleybus which would be there had the explosion been stronger (as for example from a howitzer with 122 or 152 mm caliber shells) serve as substantiation to the above statement.

(2) The decisive cause of the deaths of the people riding in the trolleybus was not shock from the explosion but shrapnel from ammunition.

(3) Judging by the size of the craters (see accompanying photo) they are craters made by 82 mm caliber mortar ammunition. The maximum range of weapons firing similar caliber ammunition is 4 km

(4) The distance of the closest position held by Ukrainian forces to the scene of the tragedy is 8 to 10 km. It is physically impossible to fire mines from that distance. Misguided artillery or mortar discharges are out of the question, as well, for the simple reason that it is impossible to shoot those kinds of weapons from that distance. Airplanes were not being used by the Ukrainian forces.

(5) There is a video from Donetsk that shows the Russian proxies shooting 82 mm mortars at each other most likely because they are in a state of intoxication either from alcohol or from narcotics. It did not take long to find heartless perpetrators for another terrorist act against civilians. Their fate, most likely, is ominous. They will be liquidated or have already been liquidated to prevent any unnecessary broadcasts about what took place. An order from the Kremlin was received to fire a mortar at a residential neighborhood with the mandatory condition that peaceful civilians be killed preferably along a public transport route similarly to how civilians were killed in the city of Volnovakha.

The men who executed the order can send Putin an honest report that the assignment to kill peaceful civilians was completed fully and accurately just like the apartment explosions in Moscow and Volgodonsk that had served as an excuse to launch the war against Chechnya and as an initiation of bloodthirsty Putin as a great leader deserving of admiration and endorsement.

The terrorists considered it important to maximize the PR effect around the capture of the Ukrainian Cyborgs, the defenders of Donetsk airport. However their capture, which the terrorists successfully executed and in which bad weather conditions helped (and, possibly mistakes the commanders of the Cyborgs made) did not bring the desired PR effect.

Instead of bringing the terrorists hoped-for fame the PR turned out especially disastrous yesterday when the captured wounded Ukrainian Cyborgs were brought out in front of the TV cameras for an interrogation conducted by a propaganda peddler introduced as a journalist and the Cyborgs answered his questions with dignity and without a hint of fear.

So that today instead of the dead civilians who became victims of a failed PR stunt performed by Russia one of the Cyborgs was brought to the scene of the tragedy.

And it is for the same hoped-for PR effect that the idiot Zakharchenko forced the Cyborgs to parade in front of TV cameras in the streets of Donetsk.

Those bloodthirsty PR exploits will not break our spirit. We will simply become angrier and more demanding of ourselves and our leadership.

Putin tried to break our will in exactly the same way by illegally keeping the pilot, the pride of Ukraine Nadia Savchenko, in captivity.

The result has been just the opposite. For Ukrainians Nadia Savchenko has become a symbol of the struggle for the Ukrainian nation, for its sovereignty and for its independence!