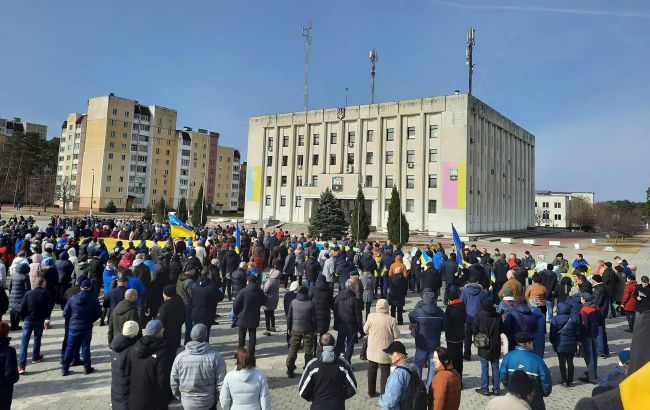 Today, March 26, 2022 hundreds of Slavutych residents came to the rally to save their city. The city of Slavutych was under siege by the russian occupiers for the recent weeks.

It became known, that Russian forces kidnapped the mayor of Slavutych, Yury Fomichev, and seized the city hospital.

Fighting is taking place on the outskirts of Slavutych for the fourth day. Today, despite of danger, citizens came to the rally and chanting ‘Slavutych is Ukraine! Russia, go away.’

The occupiers are trying to disperse the rally, which was organized by local residents, shooting into the air, the head of the Kyiv military administration Pavlyuk says.

Russian occupiers fires at the city of Slavutych with tanks, mortars and anti-aircraft guns, but the people heroically hold the defense. Despite the threats, the local population rallied against the Russian occupiers.

Situation in Slavutych updates: according to eyewitnesses, the Russian occupiers withdrew to the outskirts of the city.

The mayor of the city captured earlier by fighters is already released. According to him, the Russian occupiers promised to unblock Slavutych so that people could leave, as well as bring humanitarian aid.

Mayor Fomichev separately noted that Slavutych remains under the Ukrainian flag and under Ukrainian law. The city will continue negotiations on the rotation of the staff of the Chernobyl nuclear power plant.

Deputy Prime Minister, Minister of Reintegration Irina Vereshchuk promised that a humanitarian corridor from Slavutych would be opened. The Ukrainian side is already working on this issue.

Note that the Ukrainian authorities have not had access to the city for several weeks.

According to the MP Olga Vasilevskaya-Smaglyuk, in the afternoon the russian invaders went beyond Slavutych. However, the local city council notes that Russian military still moves around the city and looking for weapons in the hands of the population.

The city government asks people not to provoke the enemy and not to endanger themselves.

Witnesses say that in the morning, almost the entire city went to the rally. The Russians started firing. Nobody retreated, and we brought them out of the city. Unfortunately, 1 civilian was killed and 1 was wounded during today’s peaceful protest.