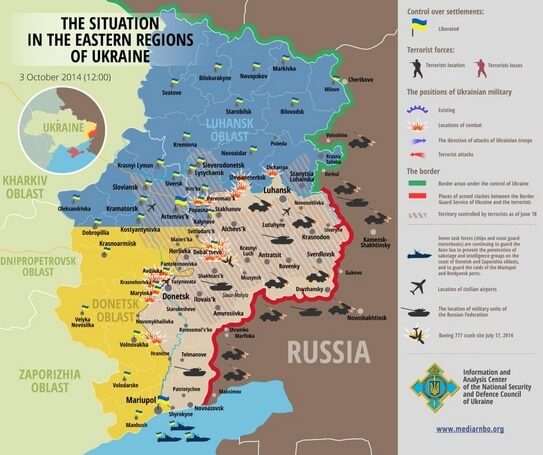 NSC News & Analysis Center briefing highlights for October 3, 2014 on the latest updates from the conflict zone in Eastern Ukraine, summarized by EMPR.

(1) In Donetsk and Luhansk Oblasts, Russian proxies continue to violate the ceasefire agreement, resulting in more and more civilian casualties.

(2) On October 2 near 18:30, shelling by the militants in the downtown districts of Donetsk, a Swiss citizen working for the International Committee of the Red Cross (ICRC) died.

(4) Ukrainian intelligence teams reports that major reinforcements of armored equipment, heavy artillery and personnel have moved in to the vicinity of Donetsk Airport. The area is being covered by reconnaissance drones to survey the area and adjust targets, all operated by Russian specialists.

(5) In the last 24 hours, 2 Ukrainian servicemen were killed and 9 others wounded.

(6) In the border area controlled by Ukraine’s forces, there have been no reported armed clashes or violations of Ukraine’s airspace.

(7) To the south of Mariupol, Ukrainian intelligence teams report that Russian Federation Armed Forces military equipment has begun accumulating, along with the 100′ RF AF reconnaissance brigade from Northern Ossetia.

(8) In the last 24 hours, special mobile teams of Ukrobornprom have repaired 4 tanks and 16 infantry and paratrooper CVs.

(9) The Kramatorsk retransmission station has resumed the broadcast of 12 domestic television channels and 4 radio stations.

(10) The SBU’s counterintelligence team has detained 3 Ukrainian citizens in Donetsk Oblast who were involved in terrorist activities in areas liberated from Russian proxies.

(11) US Assistant Secretary of State Victoria Nuland compared Russiaâ€™s actions in relation to Ukraine to the extremism and terrorism that ISIS is currently inflicting.

(12) The EU’s Foreign Affairs and Security Policy High Representative Catherine Ashton announced that a proper ceasefire is key to reaching a political solution to the crisis.

(13) The European Foreign Service expressed concern that the ceasefire has been violated in Eastern Ukraine and shelling has intensified, leading to a growing number of casualties among civilians.