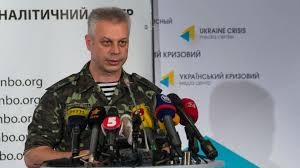 NSC News & Analysis Center briefing highlights for September 26, 2014 on the latest updates from the conflict zone in Eastern Ukraine, summarized by EMPR.

(1) The situation in the ATO zone remains difficult. After several days of relative quiet, the militants have begun attacking again.

(2) Today at 08:00 the working group with representatives of Ukraine, the OSCE monitoring mission and 76 servicemen from the Russian Federation Armed Forces (RFAF) began to work on controlling and coordinating the ceasefire and gradually stabilizing the demarcation line between the two sides. All weaponry of more than 100 mm caliber will be moved to a fixed distance and the 30-kilometer neutral zone called for in the Minsk memorandum will be established.

(3) In the last 24 hours, a number of attacks on ATO positions took place: military positions near Nikishyne and Maloorlivka in Shakhtarsk County were attacked with artillery, mortar and guns; a Ukrainian APC-80 was hit and 3 servicemen injured near Kamyanka in this same county; after 2 failed attempts to storm Donetsk International Airport, it was hit by three volleys from Grads and by mortars; and a checkpoint outside the village of Sartana in Donetsk Oblast was shelled.

(4) There were no reported Ukrainian casualties in the last 24 hours, and no reports of Ukraine’s airspace being violated.

(5) However, RF Armed Forces are carrying out ongoing radar and human reconnaissance from the depths of Ukrainian territory that is currently under their control. The militants are also engaging in contact reconnaissance by attacking to uncover ATO forces positions.

(6) The Prosecutor General’s Office reports that there is a criminal investigation currently in Sloviansk of 24 incidents involving killings. 3 mass graves have been uncovered. The bodies are currently being exhumed and are undergoing forensic analysis to establish the cause of death. Information so far is that these individuals died in early to mid-June and 12 of them have been identified by name.

(7) The situation in Mariupol remains difficult but stable. Rail and local transport, educational institutions and kindergartens continue to operate normally. City Hall is directly organizing and managing efforts to build fortifications for Ukraine’s military and to strengthen municipal patrols.

(8) On September 25, Russian proxies mined a section of roadway from Holubivske towards Toshkivka in Popasna County, Luhansk Oblast, not far from Pervomaisk and bridges near the city of Kirovsk.

(9) EU Commissioner for Trade Karl de Gucht announced that there are no grounds for easing sanctions against Russia at this time.

(10) UN Sec-Gen Ban Ki-Moon promised to assist in the release of Pilot Nadia Savchenko and film director Oleh Sentsov, Ukrainian citizens who have been illegally detained by Russia.

(11) The G7 has announced that it favors instituting trilateral negotiations and urges the release of all hostages held by militants in Eastern Ukraine.

(12) Polish President Bronislaw Komorowski declared at a session of the UN General Assembly that the UN Security Council has proved ineffective in the face of the crisis in Ukraine and called for the body to be reformed.

(13) The President of Latvia called on Russia to immediately withdraw its armed forces from Ukrainian territory and to stop providing arms and mercenaries to terrorist groups.

(14) European Council President Herman Van Rompuy announced that the European Union was ready to renew trust in Russia if the latter carries out its obligations in terms of regulating the crisis in Ukraine.

(15) Germany’s Foreign Minister Frank-Walter Steinmeier warned that there should be no expectations that the resolution of the Ukrainian-Russian conflict would be quick.