Home » In Ukraine, 128 children died and more than 172 were wounded by the russian occupiers

In Ukraine, 128 children died and more than 172 were wounded by the russian occupiers 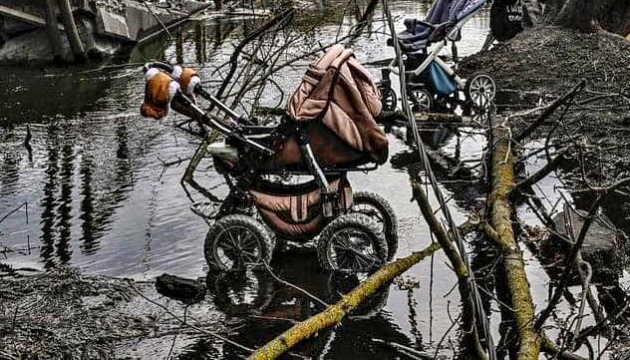 During Russia’s month-long war against Ukraine, 128 children died and more than 172 were wounded by the occupiers

The body of 11-year-old gymnast Kateryna was found in Mariupol under the rubble of a house shelled by the occupiers. The little athlete has repeatedly won major competitions.

On March 11, 2022 during the evacuation of civilians from the village Peremoha Brovarsky district of Kyiv region, the Russian military used weapons on a convoy of cars, as a result a 13-year-old boy was killed.

On March 13, 2022, in the town of Bucha, Kyiv region, Russian Nazis ruthlessly shot a car with a family inside, a mother and two children aged 4 and 9 were killed.

9 children from Mariupol and Severodonetsk were taken to the Dnipropetrovsk Regional Children’s Clinical Hospital with serious injuries as a result of the shelling by Russian terrorists.

The bombings and shelling damaged 566 educational institutions, 73 of which were completely destroyed. Among educational institutions, more than 230 schools and 155 kindergartens were damaged and destroyed. The most damaged was done to Donetsk, Kharkiv, Mykolaiv, Sumy, Kyiv, Kherson, Chernihiv regions and the city of Kyiv. In addition, more than 40 children’s facilities were destroyed, including medical facilities, art schools, sports facilities, and libraries.

These data are not final, given the inability to inspect the sites of shelling in places where active hostilities are taking place and in the temporarily occupied territories.

This will not be forgiven.