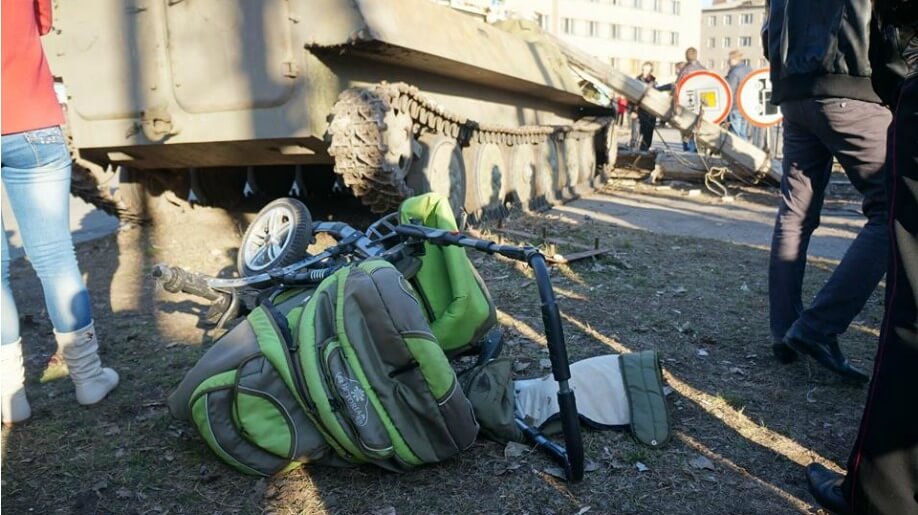 On 16 March in government-controlled Kostyantynivka, Donetsk region an MT-LB multi-purpose armoured vehicle of the Ukrainian Armed Forces lost control and drove out to the sidewalk running over a family of three.

8 year old girl was killed (7 year old as per other reports), her mother and the infant were taken to hospital, reported the Interior Ministry.

Shortly after the incident the Head of the Main Directorate of the Interior Ministry in the Donetsk region Vyacheslav Abroskin said that responsible for the accident – two servicemen were detained and passed to the military prosecutor’s office. Investigation into the case was started.

The next day the General Staff stated that the serviceman driving the vehicle was drunk and that the commander of the unit was suspended from service until the investigation is completed. “Such behaviour is unacceptable for the servicemen of the Armed Forces, it dishonours the Ukrainian serviceman,” wrote the General Staff in its statement. The military command claimed ready to assist the investigation to the maximum.

The governor of the Donetsk region Oleksandr Kikhtenko said the Ministry of Defense will financially “reimburse the loss” to the family. “Authorities understand their fault and will help the family,” added the governor.

Following the incident Kostyantynivka residents started throwing stones into the military vehicles passing by, wrote local reporter Volodymyr Berezin on his Facebook page. Later a police car and a UAZ vehicle next to the medical college were overturned and burnt by the protesters. Tyres were burnt outside of the industrial college dormitory where Ukrainian servicemen were said to be staying. Police Chief in the Donetsk region Abroskin reported to have arrived on site at around 23.00 on 16 March. “30-50 young men were still there, aged 18 to 30, majority of them were under the influence of alcohol. They demanded just and immediate punishment for the military criminals responsible for the child’s death. They spoke on the behaviour of the military in town, including on the alcohol ban for them,” said Abroskin. Police managed to convince the majority of the crowd to leave. Organizers of the events are detected, he concludes.

Opinions were voiced that subversives used the tragic incident in Kostyantynivka to stir unrest in the town and destabilize the situation.

On 17 March in the evening over 50 people, mostly elderly gathered once again for a rally. Later young men in masks joined them, reports Hromadske.TV. The sound of a shot fired was audible once in the crowd, the journalist says. Slogans “DNR”, “Novorossiya” were heard, police did not detain anyone.

“They do not want to show their faces and are acting aggressively, some explain that it’s because they are from Makiivka, what they were doing in Kostyantynivka they did not say,” the journalist adds.

On 18 March Vyacheslav Abroskin said that “all criminals to have participated in the unrest have been detected and will be brought to criminal responsibility.” He also warned the locals against possible provocations by pro-Russian subversives and called on people not to fall for these acts.