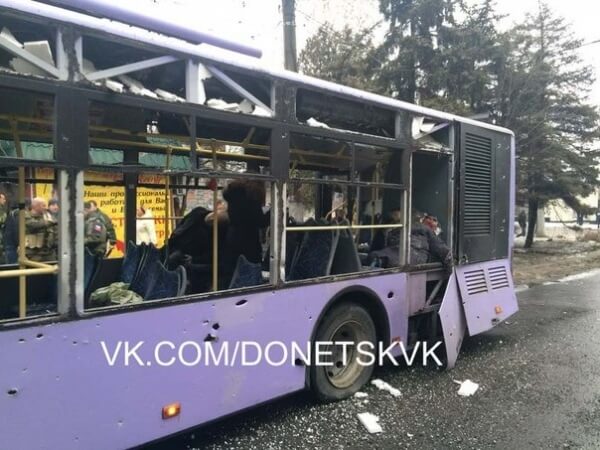 22 January, at least 8 persons were killed and 7 injured as a result of mortar shelling of a trolleybus in Donetsk, Donetsk Regional Administration reports.

It was only recently that Ukraine was shocked by Volnovakha tragedy taking 13 lives of civilians as a result of bus shelled by Russian terrorists near Ukrainian check-point on 13 January.

Today Ukraine faces one more tragedy: at least 8 persons have been killed and 7 injured as a result of mortar shelling of a trolley bus, near-by public transport and tram stop in Donetsk.

The Prosecutor’s Office of Donetsk Oblast has qualified this accident as a terrorist attack, the press-service of the Prosecutor’s Office informs. The statement also says that the place of accident is in 20 km from the conflict zone near the Donetsk Airport and from the nearest location of Ukrainian forces. It means that militants shelled civilians on purpose.

It shall be particularly noted that the trolleybus was shelled by mortar and not by BM-21 launch vehicle “Grad”. This information is proved not only by eyewitnesses and Ukrainian authorities, but also by so-called ‘DNR Ministry of Defense’ and Russian mass-media. Contrary to ‘Grad’, the range of mortar is limited by 4,3 km at longest, while the closest position of Ukrainian forces is at least in 20 km. That’s why to shuffle off the blame from Russian terrorists on to Ukrainian forces, Russian mass-media have to invent completely absurd stories about a Ukrainian raiding party shelling the civilian trolley bus from … a garbage truck.