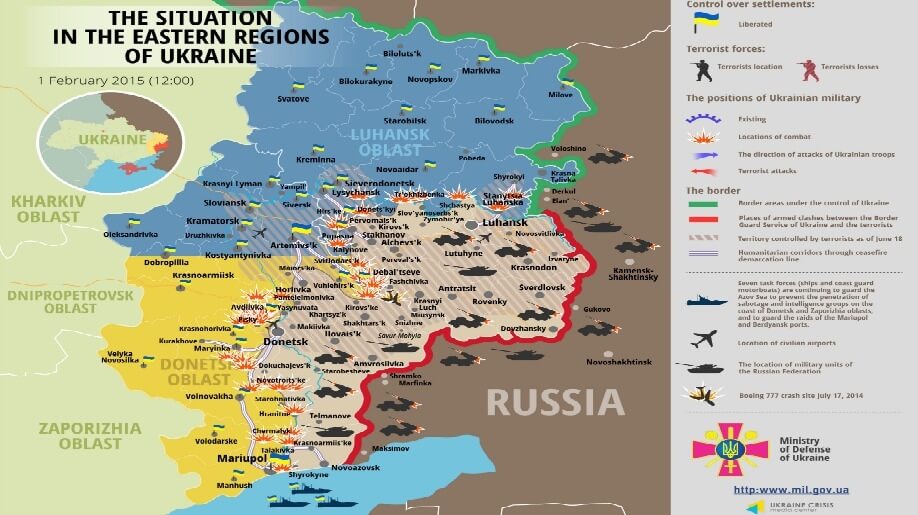 (1) The situation in the ATO in eastern Ukraine remains tense. Terrorists actively continue shelling with artillery, mortars, tanks and BM-21 Grad along the whole front line;

(2) The worst situation remains in Debaltseve area. Terrorists attempt to seize territory around the localities of Vuglegyrsk, Sanzharyvka and Nyzhne Lozove in Donetsk oblast.

(3) Terrorists have assaulted a Ukrainian checkpoint near the village of Fashchyvka with 4 tanks and a car. Ukrainian soldiers demolished 1 enemy tank;

(4) In the meantime, another 12th so called Russian humanitarian convoy passed the border into Ukraine. In accordance with Russian MFA’s statement, convoy includes 1500 tonnes of cargo. 85 trucks headed to the city of Donetsk and 90 to Luhansk accordingly. Russia violates international law once again. There was no any Red Cross representative at the moment of passing the Russia-Ukraine border as well as Ukrainian border Guard and fiscal services have been allowed to carry out trucks visual inspection only;

(6) 5 Ukrainian soldiers have been freed from the militant’s captivity yesterday: 5 serving in the National Guard (51th brigade) and 3 in Donbas Volunteer Battalion accordingly;

(8) Yesterday, 1000 Debaltsevo citizens, including children and disabled person, have been evacuated by the Donetsk Emergency Service staff. The rescuers also evacuated 60 persons from the city of Avdyivka, 28 children from the city of Schastya, and 62 from Troytske (including 10 kids).