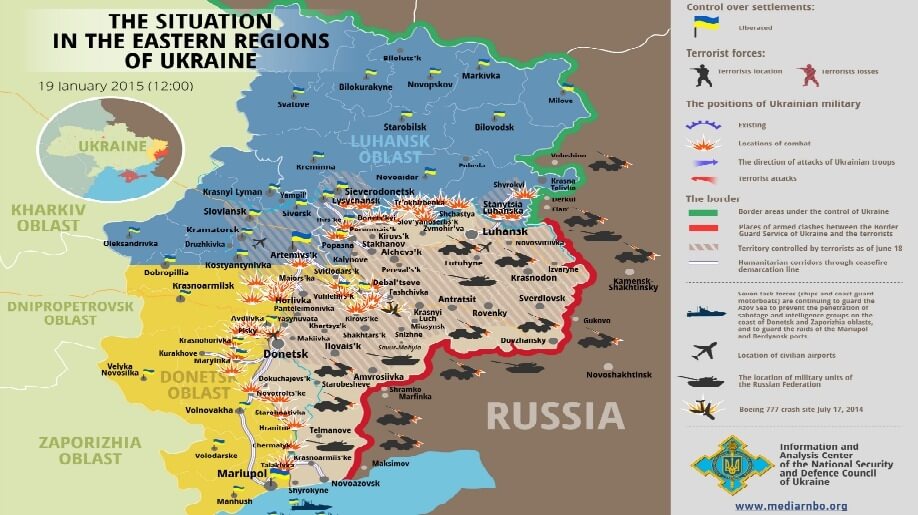 News & Analysis Center of the National Security Council of Ukraine presents the latest updates from the conflict zone in eastern Ukraine on January 19,2015 at its daily briefing.

(2) Luhansk terrorists announced establ of so-called “air forces” today from 2 aircrafts (SU-25 and L-29). It could be disguise for use of Russian aviation against Ukrainian forces. NSC admits, that in case Russian aviation will be used against civilians or Ukrainian military forces, air targets will be destroyed.

(5) Today at 7:45 a.m. militants shelled Debaltseve. 15-20 shells hit city center. At least 10 civilians wounded, including 8 years old girl and her mother. There are many wounded among adults and children. Residential buildings as well as city railway station are destroyed.

(6) 3 Ukrainian servicemen were killed and 66 got wounded witing the last 24 hours.

(7) Yesterday, humanitarian aid (food sets and medicines) for Tryokhizbenka citizens have been transported by volunteers along with Ukrainian servicemen. Tryokhizbenka village is located in Popasnyanskiy rayon of Luhansk oblast and is regulary shelled with BM-21 Grad by terrorists.

(8) No coordinates were put into Minsk agreement when signing as to location of forces, delimit. Forces supposed to stay where they were.