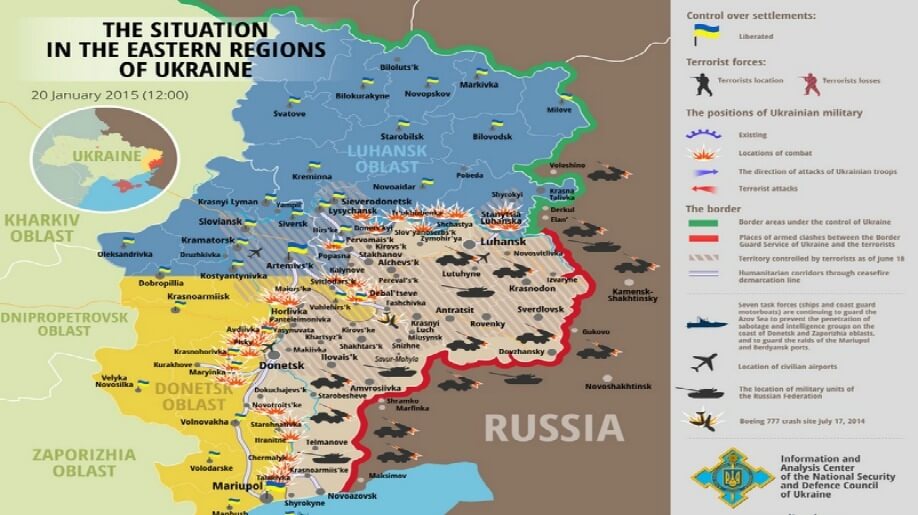 News & Analysis Center of the National Security Council of Ukraine presents the latest updates from the conflict zone in eastern Ukraine on January 20,2015 at its daily briefing.

(2) No losses among Ukrainian servicemen withing the last 24 hours, but 19 soldiers have been wounded.

(3) Militants continue provocation against Ukrainian army by shelling at the residential areas and blamimg after that Ukrainian army. Yesterday 2 civilians have been wounded as result of artillery shelling in Avdyyvka. Artillery shelling in Debaltseve resulted death of 2 adults and 5-years-old boy. Besides, 10 civilians, including 8-years-old girl were injured and transported to the local hospital. 2 people injured and 1 killed in Maryinka as result of shelling. 3 people were wounded and 1 died in Krasnogorivka.

(4) SBU reports that terroristic act near Volnovaha was planned and fulfilled by the direct order of DNR leaders. Terrorists fired with 88 BM-21 Grad missiles toward Ukrainian block post, where a bus with 40 passangers awaited to pass control. One of those missle blasted in 12 metres from the bus. 10 people died at the site and 3 more in the hospital. 20 wounded passangers have been transported to the hospital. Among murdered civilians were 7 women, the yongest one was 24. SBU find out the fact, that militants shelled from the 19 km distance, from north-east of Dokuchajevsk, the territory controlled by the terrorists.

(5) Yesterday 20 Ukrainian soldiers (so-called Cyborgs) injured in Donetsk airport were transported to Odesa. Thousands of people came next day willing to donate blood for their treatment.

(6) Over the last two days number of shelling at the Ukrainian forces positions in the areas near Mariupol increased.

(7) Partial mobilization officialy started in Ukraine for the next 210 days.

UPDATES from the evening NSC briefing at 19:00.

(9) 29th and 31st checkpoints were attacked, combat with regular Russion troops (!) are currently on between Zemygirya and Slovianoserbsk.

(9) NSC gave no info on injured and killed Ukrainian soldiers at Donetsk airport as well as didn’t confirmed info about 8 hostages so far. Promised official info will come soon.