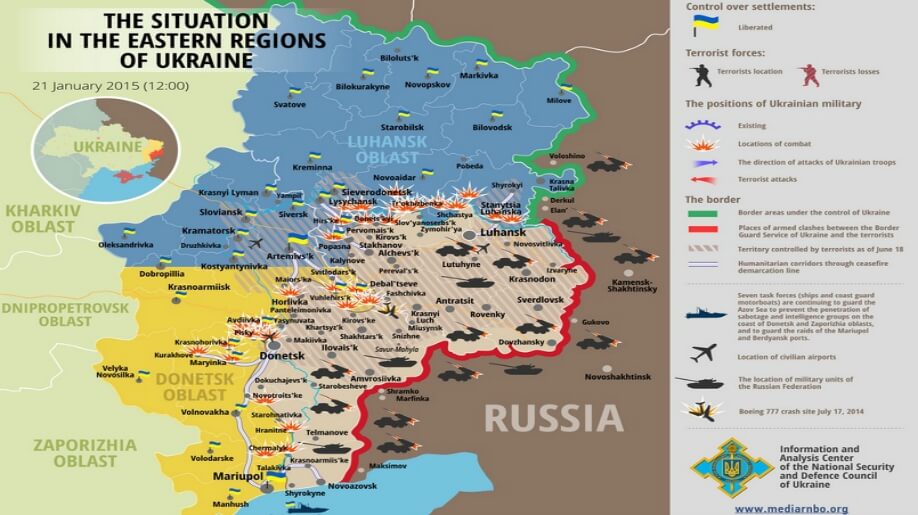 News & Analysis Center of the National Security Council of Ukraine presents the latest updates from the conflict zone in eastern Ukraine on January 21,2015 at its daily briefing.

(1) 1 Ukrainian serviceman was killed in action in the last 24hrs, 40 got wounded.

(2) Combat is on at the Donetsk airport, militants have blasted the runway, reinforcement to Ukrainian forces arrived.

(3) Head of the General Staff of the Armed Forces Muzhenko is in the conflict zone right now.

(5) Ukrainian forces stepped back from 31st block post to their stronghold, continue combat.

(6) Russian troops without insignia was seen near Near Luhansk, near Krasnodon 60 Russian tanks, BMPs, 100 Tiger vehicles. Also 100 Russian tanks are located near Shakhtarsk and Torez.

(7) 40 Ukrainian soldiers wounded in the conflict zone transported in hospitals.

(9) Ukrainian troops preserved control over 29th block post and stopped Russian troops. 31st block post is currently on the neutral territory, combat on to fight it back.

(10) NSC has no confirmation so far that Russian General was killed yesterday in the territory of eastern Ukraine.