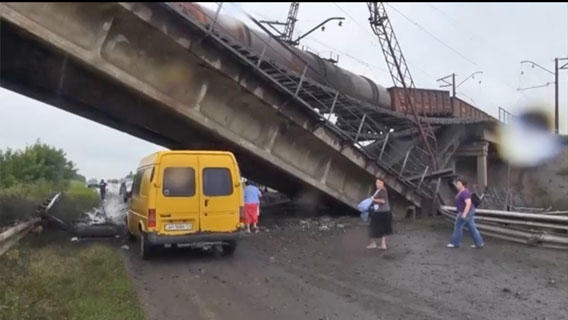 The active phase of the Anti-Terrorist Operation (ATO) continues in Donetsk and Luhansk Oblasts.
The NSC News & Analysis Center Spokesman Andriy Lysenko reported at the Center’s daily briefing in Kyiv on July 7, 2014, that a series of population centers were taken back from the terrorists last week in cooperative action among units from the Ukrainian Armed Forces, the SBU, the Interior Ministry, the National Guard, and the State Border Service.

This included Sloviansk, Kramatorsk, Kostiantynivka, Artemivsk, Druzhkivka, the border town of Mykolayivka, and the Dolzhanskiy border crossing. On July 6, the national flag was raised over Artemivsk and Druzhkivka.

At the moment, the priority objective, in line with the instructions of the President of Ukraine, is to restore peaceful civilian life on those territories liberated from terrorists.

Ukrainian soldiers are actively destroying mines in administrative and social infrastructure, vital objects, bridges and roadways. ATO forces have been neutralizing terrorists who masquerade as peaceful residents. Special technical services are doing everything they can to restore residential water and electrical services.

Aid is also being provided to the local population, including medications, potable water and food. On July 6, residents of the towns of Sloviansk, Sviatohirsk and Druzhkivka were give more than 25 tonnes of humanitarian aid.

The first series of pension payments for July has also been transferred to residents of Sloviansk and Kramatorsk Counties. Repair crews are doing everything possible to restore rail service as well.

The Anti-Terrorist Operation continues to be carried out according to the President’s strategic plan to liberate Donbas. The President has made it a priority to do everything to minimize threats to and avoid casualties among the local population. Air attacks and the use of heavy artillery in population centers are therefore precluded.

At the same time, the Head of State stressed that no ceasefire can be one-sided. The option of ceasing the active phase of the ATO will be considered only after the peace plan has been complied with in full, which includes, on the part of the militants, releasing all hostages and prisoners, leaving all Ukrainian towns and cities, turning over all weapons, and handing complete control over the state border with the engagement of OSCE monitors to track the situation.

On July 7, ATO forces are concentrating on destroying all militant training bases, camps and checkpoints, restoring control over the international border, and reliably isolating the conflict zone. A mood of panic has been observed among the mercenaries as a result of the actions being carried out against their ranks. More and more militants are giving themselves up to be captured. The number of prisoners and the quantity of weaponry that has been given up are now being counted.

During the last 24 hours, terrorists opened fire 10 times against checkpoints and positions held by UAF units in the neighborhood of Luhansk, Kreminna, Amvrosiyivka and Dovzhanskiy. All attacks were repelled. There were no military casualties and only one man was injured.

Units of the State Border Service (SBS) continue to carry out their tasks to protect and defend the state border on the Ukrainian-Russian portion in extremely difficult conditions. On July 7, at around 02:00, terrorists opened fire against the Dovzhanskiy border crossing from the area around the village of Biryukovo. There were no losses among Ukraine’s border patrols or military personnel. More detailed information about the situation on the border will be provided by the First Deputy Director of the SBS, Col.-Gen. Pavlo Shysholin, after this briefing.

In the process of leaving Ukrainian towns and villages under pressure from the advance of ATO forces, saboteurs are mining key social and administrative buildings. Recognizing that this could lead to numberless losses among the general population, the President of Ukraine ordered the command of the various forces to pay particular attention to sweeping for mines and removing them in urban infrastructure in those towns liberated from the militants. In the last 24 hours alone, military sappers have disarmed 700 mines in the city of Sloviansk alone, and removed a few dozen detonators.

During monitoring of the area near the technical observation post in the village of Obryv, Donetsk Oblast, it was discovered that the militants had mined the approaches to this post in order to damage the telecommunications towers belonging to Ukrtelecom, the national telephone operator, and Kyivstar, the biggest mobile operator.

The socio-political situation in the towns liberated in Sloviansk, Artemivsk and Mariysk Counties and the town of Schastya has become more positive, as has the mood among the local population in Donetsk Oblast in general. Radio and television broadcasting has been restored on these territories. In the last 48 hours, Ukraine’s Armed Forces have taken control over two television towers in Kostiantynivka and Artemivsk, making it possible to resume broadcasting Ukrainian television channels. The third TV tower, on Mount Karachun, is being repaired.

In those areas where terrorists are temporarily in control, people continue to be kidnapped. On July 6, among others, bandits grabbed the head of the rapid-response service of the Severodonetsk Interior Ministry offices in Luhansk Oblast, his deputy and 3 other staff.

Recognizing that their inevitable defeat is looming, the saboteurs continue to destroy infrastructure. On July 6, terrorists blew up a rail bridge between the Horodnia and Kondrashivska stations, which provides access to the spur going to the Shchastynsk Combined Heating and Power Plant. In Donetsk Oblast, militants mined a dam in Zuhres and bridges on the approach to the town. In this manner, the mercenaries are doing everything they can to complicate the situation in the Donbas and to increase social tension among locals.