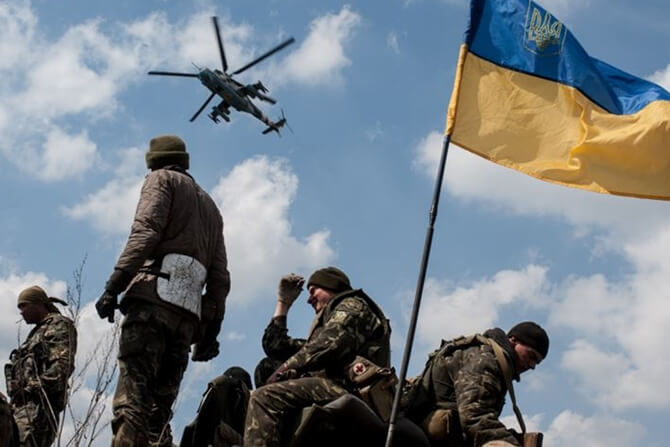 The Ukrainian government is doing everything in its power to restore civilian life on those territories abandoned by the terrorists. On July 8, President Petro Poroshenko had a working visit to the City of Sloviansk. The Head of State received reports on the progress of his orders regarding the restoration of municipal infrastructure and services, spoke with the local population, and rewarded servicemen who had distinguished themselves during the ATO.

The President once more emphasized the need to provide people with broad-based assistance, to restore vital services and residential premises that had been damaged by fire from the terrorists, Andriy Lysenko, spokesperson for the NSC News & Analysis Center, reported at the Center’s noon briefing, July 9, 2014.

On July 8, residential buildings in Sloviansk had power for the first time in several weeks. Rail links were revived. The supply of drinking water and food was also resumed. Government agencies once again began to work and are in the process of normalizing the situation, together with the army. Today, plans are to resume the services of Ukrainian mobile telecoms operators in the city.

All of Ukraine is assisting the regions that have been under fire. In the last 24 hours alone, nearly 100 tonnes of humanitarian assistance have been delivered to liberated population centers from all the other oblasts in Ukraine.

The President has also set as an objective to do everything possible so that the children of Sloviansk can go to school come September 1 and feel completely safe again.

Evidence of the renewal of normal civilian life is the fact that local residents who felt compelled to flee from the terrorists are coming back to their homes en masse.

At the same time, the President said that he was prepared to openly discuss the further fate of the Donbas region. The only condition is that his peace plan be implemented, which means disarming all the terrorists and an amnesty for those who had not engaged in any crimes.

The situation on the Ukrainian-Russian border remains tense. The terrorists continue night-time attacks and shooting at Ukrainian checkpoints at the state border. During the night of July 8-9, militants fired mortar at the Armed Forces checkpoint near the Uspenka border crossing in Donetsk Oblast. Around 01:00, a border patrol with night vision equipment was able to detect the covert movement of a large group of militants towards the border crossing. The border patrol opened fire with automatic grenade launchers and other firearms as a warning and repelled this attempt to seize the border crossing.

As a result of military action in the last 24 hours, 3 servicemen were killed and 4 were injured. Among those killed was the commander of the 5th Territorial Defense Battalion, who was shot by a sniper.

As we reported earlier, terrorists disguised themselves as members of the National Guard of Ukraine near the ATO and have been using Grad launchers to shoot at population centers.

The Command of the National Guard of Ukraine has officially stated that its units have no weapons of the Grad class. Moreover, they uphold all the laws of Ukraine in their daily activities and do not fire at civilians.

On those territories held by the terrorists, widespread violations of human rights and of the public order have been registered. In the last 24 hours, more than 10 residents of Donetsk and Luhansk Oblasts have been abducted. On July 8, militants abducted the director of a mine and his production deputy in Donetsk and drove them to an unknown destination. In the city of Petryvske in Luhansk Oblast, militants detained and drove away in an unknown direction the safety director of the Petryvske Chemical Union.

In addition, those territories where the terrorists have taken control have been subject to armed robberies: in the last 24 hours, more than 20 private and company cars in the region have been stolen. The militants also continue to destroy infrastructure. On July 9, at 06:55, saboteurs blew up part of the rail line between the Roty and Svitlodarsk stations of the Donetsk State Railway.

Prior to this, militants distributed propaganda leaflets in Luhansk Oblast claiming that the Armed Forces of Ukraine were bombing population centers. Meanwhile, they continue to shoot at residential areas to discredit the ATO forces. As an example, on July 8 from 10:00 till 12:00, militants attacked the Luhansk Airport from the Luhansk side with mortar. A shuttle bus with local passengers came under fire in the Proletariat of Donbas district. Two locals died and four were injured as a result. In addition, two private homes on vul. Smirnova were shelled and a grenade launched by the terrorists also destroyed the roof of a nine-story apartment building.

With every passing day, local support for the militants is dwindling in Donbas. The terrorists have publicly announced that they were prepared to pay RUR 20,000 [UAH 6,773] on a monthly basis to anyone who joined their ranks. This appears to confirm that only mercenaries will be fighting against Ukraine/s forces. Meanwhile, the number of voluntary combatants in terrorist organizations continues to shrink.

Lately, a slew of undeniable facts were observed that confirm, yet again, that the Russian Federation is actively supporting the terrorists and is directing their unlawful activities.

Among others, during a press conference in Donetsk on July 8, the leaders of the militants confirmed that their armored vehicles, artillery, anti-tank, anti-aircraft and firing weapons were all from Russia. The NSC has reported this on more than one occasion. At this point, the militants themselves are openly stating this. This testifies to the fact that Russia is not doing anything to de-escalate the situation in the Donbas and is interfering in peace-making efforts.

It has also become known that Ukrainian Pilot Nadia Savchenko was illegally removed from Ukraine to Russia by her terrorist abductors. When he heard this news, the President immediately requested that the Ministry of Foreign Affairs contact its counterparts in the Russian Federation, get a report on the complete circumstances of this situation, and use diplomatic efforts to gain Savchenko’s release. The President also asked the Prosecutor General’s Office to determine the circumstances under which the Ukrainian servicewoman was captured and to respond with the appropriate measures. In addition, the President asked the Ministry of Justice to provide legal assistance in getting the Ukrainian pilot released.

Ukraine’s MFA has already issued the necessary demand to release Nadia Savchenko and to do everything possible to return her to her homeland.