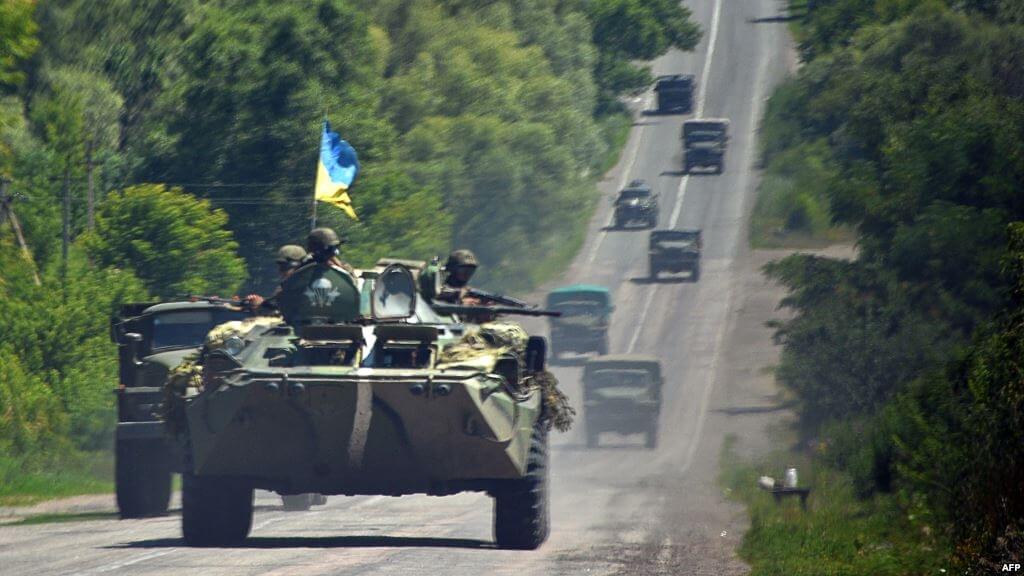 The Anti-Terrorist Operation (ATO) continues in the east of the country. Effective efforts on the part of Ukraine military have led to a lower rate of assaults from the terrorist side. At the same time, more and more militants are raising the white flag to get closer to checkpoints and open fire against the soldiers manning those posts.

Military action in the conflict Zone

In the morning of July 3, the news was that artillery had shot up the border crossing at Novoazovsk in Donetsk Oblast. Unfortunately, one of the border officers was confirmed dead at a central county hospital in the Oblast, after having suffered a serious head injury.

On July 2 evening, border patrols of the Donetsk unit stopped a Russian citizen at the Uspenka crossing in order to check his documents. It turned out that the Russian, who was exiting Ukraine, had no marks in his passport as to having officially entered the country. During a check of his belongings, the epaulets of a Major-General of the Cossacks, 10 chevrons of the local militia, a chevron of the Siberian Cossacks, a hunting knife, business cards for coordination centers, a flash card, and a laptop. While checking the data on the flash card and notebook computer, a large number of photographs were found of the owner in a Cossack Maj.-Gen.’s uniform and photographs of Cossack special forces with machine-guns. There were also specialized documents, including a handbook for a Russ Cossack, methods and means of fighting in a militia, and his mobile phone contained the phone numbers of terrorists. The man was handed over to members of the ATO.

In addition, border officers detained three suspicious citizens of the Russian Federation at the Kupiansk-Vuzloviy and Kozacha Lopan crossings in Kharkiv Oblast. Eventually it became clear that they were hoping to join terrorist groupings. The detained Russians were issued 3-year bans on entering the territory of Ukraine and returned to Russia.

On July 3, at around 11:00, a car with a family in it was blown up by a mine placed by terrorists not far from Kramatorsk. The parents died instantly. Hearing the explosion, Ukrainian soldiers immediately rushed to the scene where they found an injured but still alive 10-year old. Military medics administered first aid on the spot after which National Guardsmen and DAI [highway] officers brought the girl to a hospital. Her condition is currently stable.

Gunfire by terrorists also damaged a length of gas pipeline in the area of the ATO action. As a result, 196 families in Luhansk Oblasts have been left without natural gas, 50 of them in the village of Izvarne in Krasnodon County and 146 in the village of Vyshneve in Antratsyt County.

Today, a group of 10 armed terrorists penetrated the premises of the Sverdlovsk Heavy Machinery Plant in Luhansk Oblast and stole three company cars.

At 10:45 July 3, unknown men attacked four DAI officers near the railway station in Donetsk. The shootout resulted in three of the patrolmen being killed while the fourth one was sent to hospital in critical condition. An investigative team was put together to investigate the crime, with the Donetsk Oblast Prosecutor taking personal charge of the effort.

Local assistance to the Armed Forces

Ukrainians continue to provide support of every kind for the men involved in the ATO. According to information from the Central Military Clinical Hospital of the Defense Ministry, a record number of people are prepared to donate blood for wounded soldiers. There have been days when 160-200 people have come in to the blood donor center. At the moment, the stock of blood is maxed out. People who would like to donate blood are now signing up in a special queue that is booked up a week in advance. Among those who wish to donate blood to save the lives of Ukraine’s defenders are people of different professions and social status. the head of the State Treasury Service in Kyiv Oblast, Volodymyr Duda, who provided an example for his staff, bank employee Svitlana Khivrenko, NSC colleagues, journalists Natalia Plakhotniuk, Andriy Chaika and Natalia Makarenko, and many others. This initiative has attracted support from even the Higher Administrative Court, Oschadny Bank, the state savings bank, and many other institutions. On behalf of all the injured soldiers, we would like to thank you and offer you our respect.