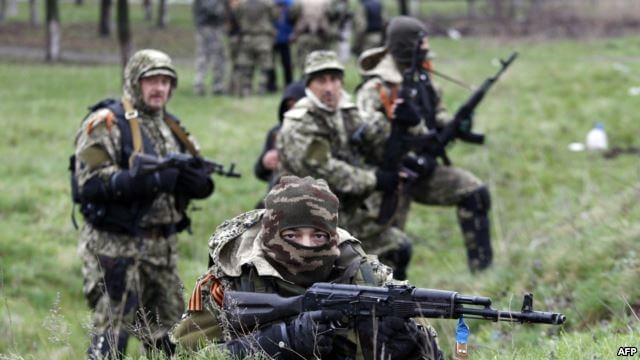 As the spokesman of the NSC News & Analysis Center, Volodymyr Chepoviy stated today, at the daily briefing, the mercenaries, despite their own promises to adhere to the ceasefire regime, shot down a helicopter of the Ukrainian Armed Forces and caused the death of 9 people.

Since the moment of the announcement of the peace plan by the President of Ukraine, the terrorists opened fire against Ukrainian soldiers about 40 times.

President of Ukraine Petro Poroshenko,on the evening of June 24th during a meeting with the leaders of law enforcement structures, gave the order to open fire in retaliation without any hesitation.

Also the Russian President Vladimir Putin addressed the Federation Council with the proposal to abolish the order regarding the usage of the Russian army in Ukraine.

Ukrainian President Petro Poroshenko considers Vladimir Putin’s address to the Federation Council regarding the abolition of the order about the usage of the Russian Armed Forces on the territory of Ukraine of March 1st, 2014, to be the first practical step after the official support by the Russian President of the Ukrainian peace plan to regulate the situation in Donbas.

The Situation at the Ukrainian border Ukrainian border workers note the presence of armed unidentified groups at the border, as well as the movement of military equipment and departments of Russian Armed Forces close the Ukrainian border. The Russian side is not doing its duty in protecting the state border with Ukraine and provides for the terroristsâ€™ crossing the border. In particular, such actions are happening at the border checkpoint Izvaryne in Luhansk oblast.

The Ukrainian side block such attempts using fire coverage on part of the Ukrainian Armed Forces.

On June 25th, between 4 and 6 am, an armed clash and shootings at roadblocks and centre block points of the state border line near the towns of Biriukovo and Dyakovo in Luhansk regions were underway. The border workers were shot at from mine launchers and sniper weapons. There are no losses among border workers.

On June 24th in Luhansk obast near the city of Sverdlovsk, the terrorists attacked the central point of a Ukrainian troop. The attack of the terrorists was rebuked, however there are unfortunate losses among our soldiers.

The consequences of the actions of terrorists groups for the civilian population of Ukraine.

Near the Putylivskiy bridge in Donetsk, at the terrorist roadblock, a car belonging to a local citizen was shot at while moving towards the airport and that did not stop at the mercenaries’ demand. As a result of the incident, a 34-year-old citizen of the city of Kramatorsk died.

In Horlivka of Donetsk oblast, on orders of one of the terrorist leaders known as ‘Bes’, the mercenaries conducted a cynical looting of the Novohorlivskiy Machinery Plant. As a result, about 5 tons of diesel, 4 vehicles (3 cars and 1 PAZ bus) were stolen, and then cash register of the company was looted on a sum of about 300 thousand UAH.

In Donetsk and Luhansk oblasts on the roads near the cities of Horlivka, Debaltseve, Kondrashevska Nova station and others, railways have been blown up using self-manufactured explosive devices, which resulted in the fall of the electrical support and damage to the rail tracks. Work to renew the railways is underway.