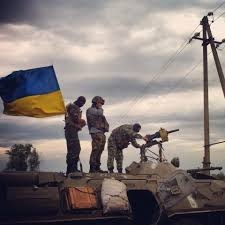 The atmosphere is Donetsk and Luhansk oblasts remains tense, reports Andriy Lysenko, the spokesman of the NSC News & Analysis Center at the daily briefing.

Despite the fact that the government of Ukraine, the Russian Federation, Western states and international organisations, declared the necessity to de-escalate the situation in the region, terrorists continue military action, which is followed by attack on ATO roadblocks, murder of peaceful civilians as well as their kidnapping, blocking of the activity of local businesses.

The Russian government is employing demonstrative means of so-called de-escalation of the situation in the east of Ukraine. For example, the withdrawal of the approval of the Federation Council to deploy the Russian army on the territory of Ukraine. Despite this, the Russian Ministry of Defence sees the cancellation of the above mentioned order by the Federation Council as a formality. It is noted that the Russian side, despite official statements, retains the right to possible military intervention in Ukraine. With this step, the Kremlin strives to win more time and render the imposition of third-level sanctions on Russia impossible. Meanwhile the covert support of mercenaries with all necessary resources continues.

To monitor the situation, National Border Service patrol jets have investigated 553 km of the Ukrainian-Russian, Ukrainian-Belorussian border, as well as 4642 square km of the Azov See. Violation of state borders has not been detected (NBS information).

The following tendency is observed in the activities of the Russian border service when the mercenaries that come from Russia to Ukraine are being let through “undetected”, if they are going into the opposite direction, they are destroyed.
Regardless of the declaration of a ceasefire on part of Ukraine, the terrorists continue to shoot at roadblocks and conduct armed attacks of the troops of Ukrainian force structures in Donetsk and Luhansk oblast. Throughout a day the illegal armed formations have shot at roadblocks and department positions of the Ukrainian armed forces 7 times near the towns of Sloviansk, Kryva Luka, Kramatorsk. All the attacks have been rebuked.

This morning, a shooting at ATO positions near the Kramatorsk airport occurred. Our soldiers made the attackers retreat by opening fire in response.

Today a group of terrorists of up 10 people shot the ATO roadblock near Donetsk. Ukrainian soldiers gave a dignified response to the attackers. One terrorist was killed. There are no victims among our soldiers.

In the city of Novohrodivka in Donetsk oblast the mercenaries made an attempt to occupy the city police department. After a shooting, MIA workers managed to detain the attackers.

The terrorists in the city of Donetsk occupied the prayer house of the Mormon Church to accommodate mercenaries. On the territory of “Yuvileyniy” sanatorium in the city of Sloviansk, as consequence of depressurisation of the radon generator, a sharp growth in radiation level ON THE TERRITORY OF THE ESTABLISHMENT is possible.

The Ministry of Emergency is employing all means necessary to investigate the level of threat and the protection of civil population. A separate press conference regarding this issue will be held at 17:00.