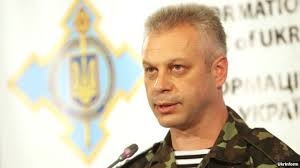 NSC News & Analysis Center briefing highlights for October 1, 2014 on the latest updates from the conflict zone in Eastern Ukraine. Summarized by EMPR.

(1) Russian proxies continue to violate the ceasefire agreement by shelling ATO forces positions. The situation is the tensest around Donetsk International Airport, Mariupol, Debaltseve, and the town of Shchastia.
(2) Over the last 24 hours, Grad MLRS volleys, shelling with mortars and gunshots were reported several times around Donetsk Airport and the towns of Nikishine, Starohnativka, Ridkodub and Avdiyivka.(3) Although there have been no casualties in the last 24 hours, 5 Ukrainian servicemen were wounded.(4) Mobile brigades of specialists from UkrOboronProm, the state-owned armaments company, repaired another 22 units of armored equipment in the last 24 hours.(5) On September 30 after the latest round of militant shelling, power was cut in 3 districts of the city of Donetsk. In addition, more than 4,000 customers in the city remain without gas supplies.(6) Terrorist activity in Luhansk threatens to leave the city without power for a long time. At the moment, only 20% of the necessary amount of electricity is being supplied.(7) The leaders of DNR terrorist organizations have started pressuring local internet providers to block 27 Ukrainian and local news resources.(8) Russian proxies continue to destroy infrastructure in the Donbas region. According to the latest information, 29 facilities involved in directing air traffic have been either damaged or completely destroyed.(9) Due to terrorist fighting in the Donbas, some 962 km of roadways have been damaged to greater or lesser degrees, as well as more than 30 bridges and overpasses.(10) In 15 cities and counties in Donetsk Oblast, the residential services sector is behind schedule in preparations for the winter period because of the conflict in the region. So far, 4,584 residential buildings have been destroyed and 42 boiler plants have been damaged.(11) On September 30, Presidential Adviser on Humanitarian Issues Dr. Olha Bohomolets held a meeting at the Presidential Administration to discuss the provision of prosthetic devices to those who were injured on the Maidan and in the ATO zone.(12) Ukraine’s Foreign Ministry announced that the IAEA has publicly revealed and condemned attempts by Russia to abuse the agency’s mechanisms to establish unilateral control over Ukraine’s atomic energy facilities in Crimea.(13) NATO’s Media Operations Chief Lt.-Col. Jay Janzen announced that “hundreds” of Russian regular military remain on Ukraine’s soil, including special forces. According to NATO data, around 20,000 soldiers of the Russian Federation’s Armed Forces are currently stationed near the border with Ukraine.(14) Given Russia’s aggression against Ukraine, Canada has suspended a contract to produce Bombardier turboprop aircraft in the city of Ulianovsk, Russian Federation, until 2015.