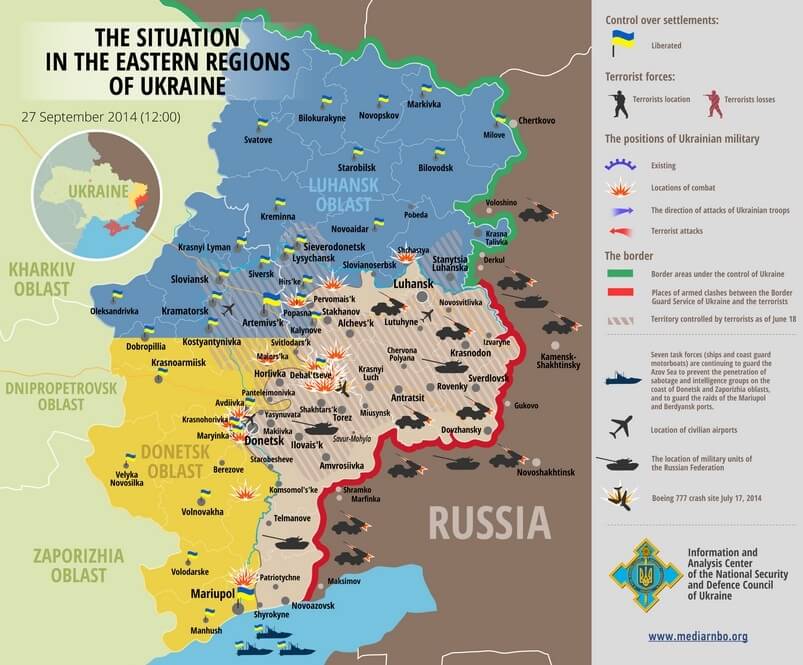 NSC News & Analysis Center briefing highlights for September 27, 2014 on the latest updates from the conflict zone in Eastern Ukraine, summarized by EMPR.

(2) Militants shelled the town of Shchastia near the Russian border, killing 1 civilian and wounding 16 others, 3 of whom are in critical condition. The local hospital was damaged, as well as the military command, the residential services administration and the tec-voc college.

(3) In shelling a Ukrainian Armed Forces checkpoint near the village of Talakivka outside Mariupol, militants hit a residential building in the village itself.

(5) No clashes between the militants or shelling of State Border Service units in the border region were reported during the last 24 hours. No reports have come in of Ukraineâ€™s airspace being violated.

(6) In the last 24 hours, shelling by Russian proxies has killed 1 Â serviceman and wounded 8 others.

(7) Mobile repair brigade specialists from Ukroboronprom, the state military equipment conglomerate, have repaired 148 pieces of equipment in the last week.

(8) The working group from the joint center for overseeing the implementation of the ceasefire is continuing its work. It consists of representatives of Ukraine, the OSCE monitoring group and Russian servicemen.

(9) Social tension among the local population is growing in those parts of Luhansk Oblast in terrorist hands because payments of social benefits have been disrupted and because the state of health among children is growing worse for lack of medications and a shrinking number of pediatric doctors.

(10) As of September 26, 172,300 customers had partly lost access to natural gas supplies in Luhansk Oblast.

(11) The interagency coordinating office began to carry out a program to provide housing for internally displaced persons (IDPs) for the fall and winter.

(12) European Parliament President Martin Schultz sent a note of protest to the Russian Embassy in Brussels over the denial of entry to the Russian Federation for MEP Rebecca Harms, who had arranged with Russian officials to observe the trial of Ukrainian pilot Nadia Savchenko.

(13) Germanyâ€™s Foreign Ministry Spokesperson Sawsan Chebli announced that the plans to hold an election in November announced by the self-proclaimed DNR are in violation of the Minsk agreements.