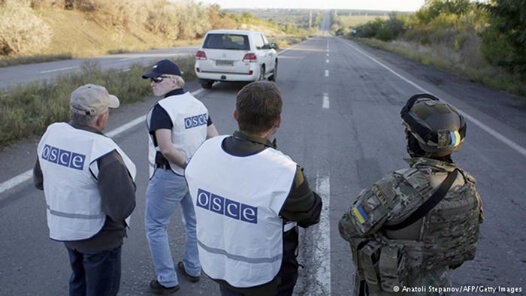 Representatives of international organizations disprove information of the Human Rights Watch on use of cluster munitions by Ukrainian army.

In his comments to DW, spokesman for the OSCE Special Monitoring Mission in Ukraine Michael Bociurkiw disproved on October 21 information on use of cluster bombs by Ukrainian servicemen. To remind, this information was published in the latest HMW report. ‘We have around 90 observers in Eastern Ukraine, – noted Bociurkiw, – we would have registered something like this, but we haven’t noticed anything. Everything we can say about munitions or shelling is reflected in our daily reports. As of today, nothing like this can be found in our reports.’

In their daily reports OSCE observers keep record of cases of shelling in Donbas. The observers travel to accident sites, as soon as they learn about them. Human Rights Watch speaks about shelling of Donetsk on 2 and 5 October as of cases when cluster munitions were used, OSCE reports for the relevant days prove facts of shelling, but there’s no information on where fire could be produced from. OSCE documents do not mention use of cluster ammunition.

Human Rights Watch claims its specialists had been monitoring the situation in Donetsk during the week. Organisation’s report among other things says employee of the International Committee of the Red Cross Laurent DuPasquier “was killed during the attack in which cluster munition rockets were used”. This information hasn’t been proved either.

ICRC representative Anastasiya Isiuk told to DW the organisation had no information that its employee was killed precisely by cluster munition rockets. ‘We only know that our colleague was killed when two shells hit the area near the ICRC office’, Isiuk said.

ATO spokesman Vladyslav Selezniov told DW Ukrainian servicemen in the combat zone had no cluster munitions. ‘Under no circumstances, – he emphasized, – we shell the locations, where peaceful residents can be, even if we kno there are militants’ artillery positions on a certain territory.’