‘Peace imitation’ in the conflict zone in eastern Ukraine 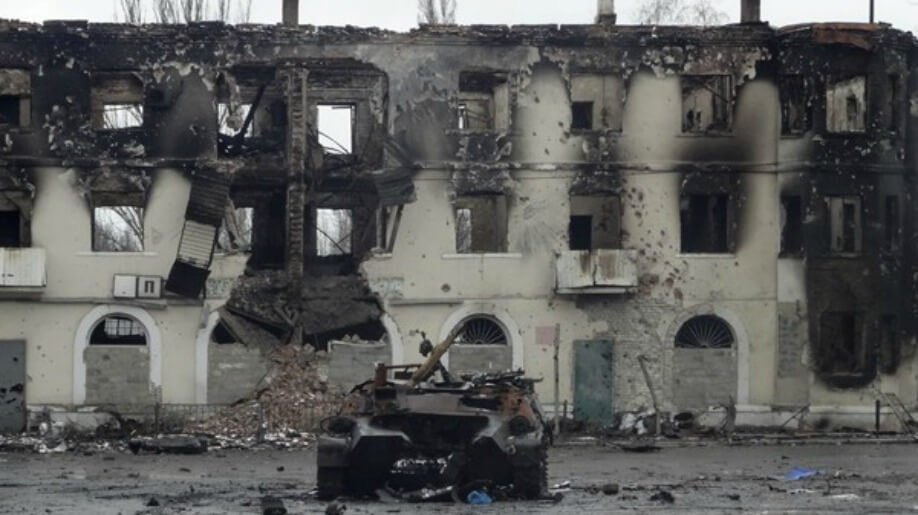 Donbass conflict: Since February 15th both Ukrainian and Russia-backed sides were obliged to implement ceasefire regime and begin heavy weapons withdrawal from the demarcation line. What is going on in fact?

‘The situation about withdrawal of terrorists heavy weapons, we can’t comment, because it’s not happened, there is just an imitation – they just move their artillery from place to place’, says NSC speaker, Colonel Andriy Lysenko. ‘The main objective for Ukrainian National Army is to monitor the situation in the conflict zone and do not miss the possible enemy`s attack’.

Shortly after the ‘The ceasefire agreement’ Russia-backed force where the first who violated it. Shelling was fixed on Debaltseve bridgehead, near the village of Shyrokyne, in the city of Mariupol and other settlements all over the conflict zone in eastern Ukraine. Ukrainian Armed Forces are complying the order and do not open the fire. They shoot in response only and in case they have an order from the General Staff of Ukraine.

Just in a few hours after the agreement was signed up, Russian militants have used the rocket systems ‘Grad’ and mine-throwers. The village of Shyrokyne and the town of Debaltseve were under the heavy shelling. Actually, there was not a day up to now, without shelling committed by Russia-backed militants. In fact, they do not mind on what direction to fire. The houses of civilians could be used as a shield to undercover their heavy weaponry from the counter-stroke. Sometimes, to provoke an inner conflict between Ukrainians, they are shelling at the civilian districts and then ‘testify’ to the locals that the fire was opened by the Ukrainian forces.

During the last week, Russia-backed militants hindered the work of International observers in eastern Ukraine, particularly in the area of the Ukrainian-Russian border. Just lately, members of illegal LPR denied the access of OSCE observers to the villages of Parkhomenko, Sverdlovsk and Vesnyane, said Alexander Hug, Deputy Chief Monitor of the OSCE Special Monitoring Mission to Ukraine. International observers recently recorded marks from tracked vehicles, leads from Russian territory into Ukraine.

The forces of illegal DPR also denied access to the village of Shyrokyne and also we were unable to monitor the situation on the highway N-20 because of the both side counteractions. And on March 13 Ukrainian soldiers were encircled by militants and it took two hours to leave the village of Shyrokyne. Around Shyrokyne now is about 8 tanks, five snipers were seen over there.

Cynicism and inhumanity of its Kremlin military campaign in the eastern Ukraine puts many people in shock and numbness. Are we still living in the Middle Ages?

Today, it’s a first anniversary since the Donbass conflict has started. March 13, 2014, Ukrainian activists were beaten by pro-Russians protesters and criminals in the downtown of Donetsk, mostly it was left-handed. A year ago pro-Russian forces had an internal support as well as external. More then 50 pro-Ukrainian activists were injured, some of them got heavy wounded. And at least 2 young guys have died. And as a year gone by, I think the number of dead or disappeared counts in thousands. The number of dead amongst civilians and militaries is not known. Ukrainian volunteers as well as the employees of the OSCE mission, has repeatedly found mass graves of people. Russian-backed militants had to conceal its military presence in Ukraine, burying their own soldiers deeply in the ground without any indificators.

A number of war crimes, that Russian-backed militants has committed for just not full year, nor made any army, including Hitler’s army. In the ranks of Russian-backed militants fighters mainly are ethnic Russians, Don Cossacks, Chechens, Ingush and some of the Ossetians. All of these mercenaries are fighting for money, not for an idea! Therefore, region’s infrastructure and civilian houses are destroying without any hesitations, and why so many deaths among civilians? Is Mr. Zakcharchenko or Plotnitsky ever think about the local residents, miners or about the region infrastructure? Or maybe they think Mr. Putin does? No way!