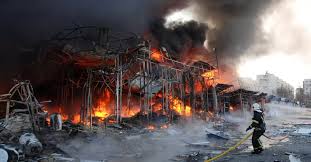 Operational information on the situation in Ukraine as of March 16, 2022 provided by the Ministry of Defense of Ukraine.

The twenty-first day of the heroic resistance of the Ukrainian people to the russian military invasion continues. The enemy continues the offensive operation against our State.

As of March 16, the enemy had not fully achieved any of the strategic goals of the offensive.

In the Volyn direction, the russian occupation forces, with the full support of the military and political leadership of the Republic of Belarus, continue to actively use its territory to deploy missile systems, launch missile strikes on Ukraine and organize all types of troops.

Also, the armed forces of the Russian Federation are actively using the airfield network and transport infrastructure of the Republic of Belarus.

The State Border Committee of the Republic of Belarus constantly monitors the situation in the areas bordering Ukraine.

In the Polissya direction, the enemy continues to focus its main efforts on conducting reconnaissance and trying to organize a counter-battery fight. Has no significant success. During the fighting, units of the 36th All-Military Army of the Eastern Military District suffered significant losses in personnel and equipment and were forced to mobilize reserves prematurely.

There are no active offensive actions by the enemy in the Siversky and Slobozhansky directions. The occupiers are trying to gain a foothold on the previously captured borders, regroup troops and replenish supplies.The enemy did not stop trying to advance south of the city of Izyum, probably in order to continue the offensive in the direction of Slovyansk. It is not successful.

In the South Buh area, the enemy continues to try to gain a foothold. After the attack on the Kherson airfield by units of the Armed Forces of Ukraine, which is temporarily under enemy control, the occupiers are trying to relocate the surviving equipment.The naval group of the Black Sea Fleet of the russian federation continues to block shipping in the northwestern part of the Black Sea.