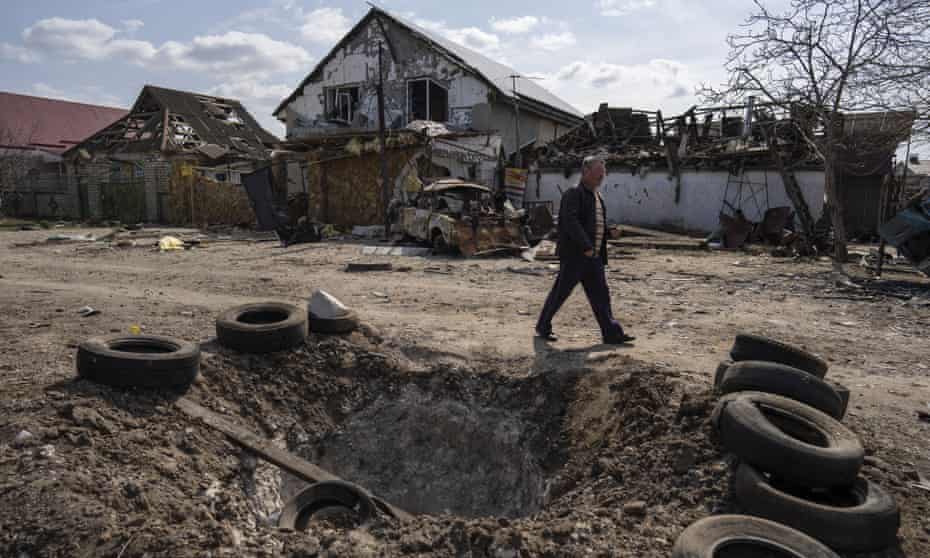 Operational information on the situation in Ukraine as of March 26, 2022 provided by the Ministry of Defense of Ukraine.

The 31d day of the heroic opposition of the Ukrainian people to the Russian military invasion continues.

The enemy continues to conduct full-scale armed aggression against our state. He did not complete any of the set tasks. Partially succeeded in some areas.

According to the available information, in order to solve the problems of logistical support of the occupation groups on the territory of Ukraine, up to 9 battalions of logistics and up to 5 main logistics centers have been deployed.

Regarding the actions of the enemy in certain areas.

The enemy did not carry out offensive operations in the Volyn direction. Units of the Armed Forces of the Republic of Belarus are conducting combat training activities at five training grounds in the Brest, Minsk and Grodno regions.

The enemy did not conduct active offensive operations in the Polissya direction. He carried out fire on units of the Defense Forces, fired on residential areas in the suburbs and directly in the city of Kyiv.

According to the available data, certain units of the 35th All-Military Army of the Eastern Military District, which suffered significant losses during the offensive, are being regrouped. Several units were assigned to the Chornobyl area with the subsequent relocation to the territory of the Republic of Belarus for measures to restore combat capability.

It is possible that after the implementation of these measures, regrouping and strengthening of the occupying forces, the occupiers will resume actions to block Kyiv from the south-western direction.

In the northern direction, the enemy did not conduct active offensive forces with the Central Military District.

He tried to focus his main efforts on consolidating and maintaining the previously occupied borders.

He did not stop trying to blockade the city of Chernihiv by separate units of the 41st General Army and the 90th Panzer Division of the Central Military District. He continued shelling residential neighborhoods in the areas of Chernihiv, Ivanivka and Nizhyn.

Probably, Slavutych is trying to keep the city in the company of a tactical group of units of the armed forces of the Russian Federation and the Rosguard. The Russian occupiers set up checkpoints at the entrances to the city.

In the direction of Brovary, enemy units were stopped. The enemy was forced to move to the defense, carrying out engineering equipment positions. As a result of hostilities in the Lukyanivka and Rudnytske districts, units of the BTGr of the 30th separate motorized rifle brigade suffered significant losses and withdrew to the settlements of Pisky and Nova Basan.
To make up for the loss of weapons and equipment, columns were marked in the directions of the settlements of Velykyi Sambir, Deptivka, Golinka, and in the direction of Dubovyazovka.
Helicopters covered the columns from the air.

In the direction of Sumy, the enemy did not conduct active offensive forces by units of the 1st Panzer Army. His main efforts were focused on the regrouping of troops.

In the area of ​​the city of Kharkiv, the occupiers did not carry out active offensive operations.

The main efforts were focused on replenishing current losses, restoring equipment and striking on the city’s civilian infrastructure.

In the direction of Slovyansk, the enemy is acting with forces of up to three BTGs, trying to gain a foothold in the areas of the settlements of Kamyanka, Sinichyne, Sukha Kamyanka.

In the Donetsk direction, the enemy continues to regroup and build up strike groups to resume offensive operations in order to reach the administrative borders of Donetsk and Luhansk regions.

The main efforts are focused on taking control of the settlements of Popasna, Rubizhne, access to the areas of settlements Vugledar, Novotroitskoe, as well as the capture of the hero city of Mariupol.

In Rubezhnoye, with the support of artillery, he held positions in the northern and northwestern parts of the city.

In Popasna, with the support of artillery, he tried to carry out assault operations, was unsuccessful, and suffered losses. Due to the lack of cooperation, he fired mortar fire at his own positions.

In the direction of the settlement of Krasnohorivka he made attempts to start assault operations. He was not successful. He suffered losses and left.

Continues to storm Mariupol, inflicts air and artillery strikes on civilian and military infrastructure. It is not successful.

No changes in the composition and position of the enemy were recorded in the Tavriya direction.

In the direction of Mykolayiv, the occupation units continue to conduct reconnaissance and try to inflict fire on the positions of units of the Armed Forces of Ukraine.