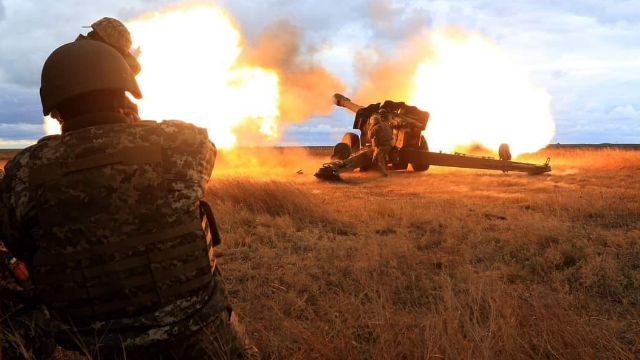 Operation information on the situation in Ukraine as of 24:00 March 5, 2022 provided by the Ministry of Defense of Ukraine.

The tenth day of the heroic resistance of the Ukrainian people to the Russian military invasion is over. The enemy continues its offensive operation against Ukraine, concentrating its main efforts on encircling the cities of Kyiv, Kharkiv, and Mykolayiv, reaching the administrative borders in Luhansk and Donetsk oblasts, and creating a land corridor with the Autonomous Republic of Crimea.

Su-35C, Su-34 and Su-25 aircraft were involved in air strikes on military and civilian infrastructure in Kyiv and Zhytomyr oblasts.

In addition, Su-34 bombers from Buturlinovka airfield carried out air strikes on Ukrainian infrastructure near the city of Sumy.

A concentration of units of the Armed Forces of the Republic of Belarus was recorded in the vicinity of Hrushka (Maloritsky district) and Khotyslav.

In the Polissya sector, troops of the Eastern Military District, the Pacific Fleet, and the Airborne Troops of the Russian Armed Forces with up to 18 BTGs operate in the vicinity of Poliske, Kukhari, Borodyanka, Byshiv, Horenychi, and Demydiv.

According to the available data, after regrouping, units of the Eastern Military District and the Airborne Troops of the RF Armed Forces, which suffered significant losses near the Hostomel airport, are redeploying units of the 76th Airborne Assault Division in the direction of Bilohorodka. The enemy keeps trying to reach the southwestern outskirts of Kyiv.

In the Siverskyi sector, troops of the Central Military District with forces of up to 12 BTGs from units of the 41st and 2nd Combined Arms Armies and the 90th Panzer Division are conducting offensive attacks in northeastern Ukraine.

Up to 100 weapons and military equipment, including Buratino TOC-1, were recorded moving in the direction of Kozelets.

Regrouping of enemy troops in the Brovary sector continues. The movement of units in the direction of Peremoha is under way. The occupiers try to approach the Brovary-Boryspil highway.

Units of the 6th All-Military Army and the 1st Panzer Army of the Western Military District have moved to attack Chernihiv and Nizhyn.

In the Slobozhansk sector, a group with up to 23 BTGs from the 1st Panzer Army and 20th all-military army, the 14th Army Corps of the Northern Fleet of the Russian Armed Forces, which suffered significant losses, areregrouping to resume the offensive in the directions of Lubny, Poltava and Kharkiv.

According to the available data, the occupiers intend to seize another important infrastructural object – the dam of Kaniv Hydro Power Plant.

In the Donetsk sector, the enemy with up to 7 BTGrs of the 1st and 2nd army corps and 150th motorized infantry division is trying to continue offensive operations in the direction of Dnipro and Zaporizhia.

In the Severodonetsk direction, the enemy, with up to 2 BTGrs, is trying to develop an offensive in the direction of Izyum. The enemy has been stopped on the river Seversky Donets. It accumulates manpower and equipment to resume the offensive.

In the Mariupol sector, the enemy continues to block Mariupol, to carry out artillery shelling of the city’s civilian infrastructure.

In the Mykolaiv sector, during the day about three BTGrs of the 7th airborne assault division of Airborne Troops attacked Mykolaiv, but suffered considerable losses. The enemy did not succeed.

In the Zaporizhzhia sector, the enemy, with up to 3 BTGrs, with the support of aircraft, is advancing on Zaporizhzhia in the direction Nova Odesa and Mykolayiv.

In the South Bug and Bessarabian sectors, units of the task force of Russian troops in the security zone of the self-proclaimed Transnistrian region are on high alert. Moral and psychological state of personnel is at a low level. Most servicemen do not want to take part in hostilities on the territory of Ukraine.

During the day, the occupiers were inflicted with significant losses: 4 helicopters, 5 planes and 1 UAV were shot down, several air raids were made on enemy convoys, and the losses are being clarified.

The enemy continues to leave its equipment – only one of the brigades of the Armed Forces of Ukraine captured and uses for their needs about 30 units of various armoured vehicles, cars and tanks.