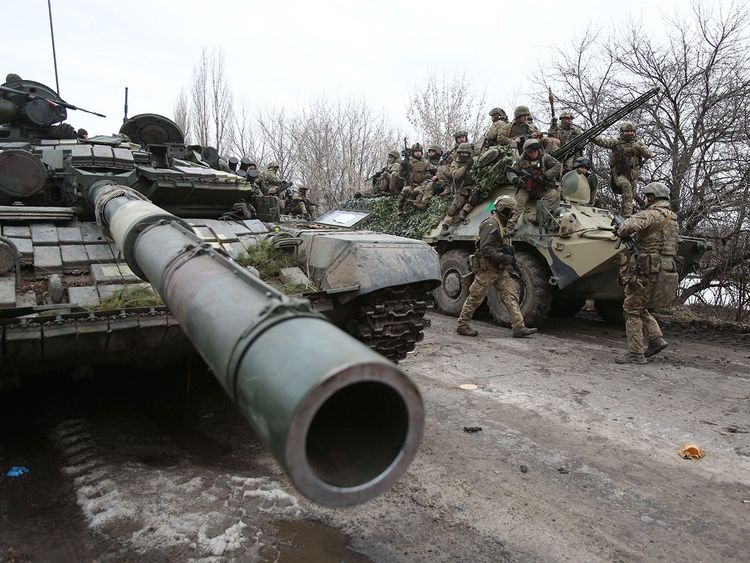 The thirteenth day of the heroic resistance of the Ukrainian people against the russian military invasion has begun. The situation at the beginning of the days described below:

The enemy continues the offensive, but the pace of advance of his troops has slowed significantly.

The Defence Forces continues to conduct a defence operation within the Southern, Eastern and Northern Operational Zones along defined boundaries.

The heroic defence of the city of Chernihiv continues in the Siversky direction.

The Kyiv City Defence Forces continue to defend the capital along the outer border of the defence and in additionally defined areas.

In the Southern operational zone the defensive operation along the state border is carried out and the sea coast is covered, defensive fights in suburbs of Mykolayiv are conducted.

In other areas, the stabilization operation is underway and territorial defence tasks are operating in the designated operational zone.

The Air Force of the Armed Forces of Ukraine successfully repulses missile and air strikes and means of air attack of the enemy, air cover of critical objects of Ukraine and groups of troops.

The occupiers are demoralized and increasingly looting and violating the rules of international humanitarian law on military conflict.

Thus, in Kharkiv, Sumy, Chernihiv and Kyiv oblasts, in the territories temporarily occupied by the russian occupiers there are the facts of robberies, acts of violence against local residents, seizure of civilian housing, use of agricultural hangars for parking military equipment, setting up firing positions in the area of civil infrastructure facilities are widely recorded.

In the territories which are temporarily occupied by the enemy in Kherson and Mykolayiv oblasts, after February 24, 2022, the occupiers use units of psychological operations to influence the local population.

According to the available information, up to 10 tactical groups of psychological operations with tasks related to conducting propaganda work with the local population have been created.

The occupiers are intimidating the population of the northern part of the temporarily occupied territory of the Autonomous Republic of Crimea with the offensive of the Armed Forces of Ukraine.

In addition, the Federal Security Service of the russian federation is setting up task forces there to work with the population, in particular to identify resistance.

In the eastern direction, the Allied forces are conducting a defense operation in Donetsk, Slobozhansky and part of the Tavriya operational district. The circular defense of Mariupol continues.
In the Northern and Western directions, the defense operation continues in the Polissya, Volyn and Siversky operational districts.
The grouping of forces and means of defense of the city of Kyiv continues to repel the offensive and deter the enemy, defeats him and maintains the defensive lines around the city.
The Armed Forces of Ukraine continue to defend Chernihiv with certain forces.
In the South the sea coast is covered, defense of Mykolaiv and adjacent settlements is conducted.
Stabilization operations are being carried out in other areas and territorial defense tasks are being carried out.
The Air Force of the Armed Forces of Ukraine repels concentrated missile and air strikes and means of air attack of the enemy, air cover of objects of critical infrastructure of Ukraine and groups of troops.
According to available information, in order to make up for losses, the enemy carries out covert mobilization under the guise of training camps. Also, in order to stop the outflow of personnel, the military leadership of the Russian Federation Armed Forces decided to ban the termination of contracts for military service.
In order to strengthen the grouping of troops in the direction of Kyiv, the occupiers plan to transfer up to a thousand militants from the private military company “League” (former “Wagner”).
In violation of the requirements of International Humanitarian Law, the occupiers continue to hold civilians hostage, damage civilian buildings, rob locals, carry out sabotage of civilian infrastructure, place weapons and military equipment in densely populated neighborhoods, steal vehicles and vehicles. in civilian clothes.
As of this time, the enemy has significantly reduced the pace of advancement, its personnel are demoralized.

During the day, the enemy reduced the pace of the offensive operation, using mainly missile and bomb strikes on civilian infrastructure.

The main efforts of the enemy continue to focus on:encirclement and capture of Kyiv, Sumy, Kharkiv, Mariupol, Mykolayiv, Chernihiv; creation of a land corridor between the TOT of the Autonomous Republic of Crimea and the mainland of the Russian Federation; access to the administrative borders of Luhansk and Donetsk regions.

According to the available information, the occupiers are considering the issue of organizing the effective provision of their own troops with fuel through the use of the existing stationary network of automobile gas stations and oil storage facilities. Also, the enemy plans to create a network of field pipelines in the temporarily occupied territory of Ukraine, with the possibility of connecting them to the central oil pipeline and pumping fuel from the territory of the Republic of Belarus.In the course of hostilities on the territory of Ukrain the occupiers continue to suffer significant losses.

Thus, according to available information, 14 separate special purpose brigades (Khabarovsk) lost more than 400 servicemen (to be specified), BTGr of the 25th separate motorized rifle brigade (Luga) of the 6th all-military army was withdrawn to the territory of the Russian Federation due to loss of combat capability.In the Polissya direction, the enemy continues to hold the previously occupied frontiers and captured settlements, in particular Borodyanka, Kopyliv, Bucha, Demidiv.

In the area of ​ Buzova, with forces up to 4 BTGr from the 36th General Army (two BTGr from the 5th Separate Tank Brigade and 37th Separate Motorized Rifle Brigade), despite the numerous losses, advanced to the area of Yasnohorodka.In the northern direction, the occupiers did not stop trying to capture the city of Chernihiv.

From the area of ​Hlukhiv, with forces of up to five BTGs from the 90th Tank Division and 4 BTGs from the 2nd All-Military Army of the Central Military District, tried to intervene in the defense of the operative group of the Armed Forces of Ukraine and was stopped. In order to ensure the offensive in the direction of Kozelets is trying to guide and hold the pontoon-bridge crossing.In the Slobozhansky direction, the enemy did not stop trying to block Kharkiv from the north, but, without much success, it also launched missile and bomb strikes on civilian infrastructure in order to intimidate the civilian population. The battle for Izum. The enemy leads pontoon-bridge crossings across the Siversky Donets and Berek rivers.

In the Tavriya and Southern directions, the enemy forces up to seventeen BTGs hold the settlements of Kherson, Enerhodar, and Vasylivka, and regroup their forces for a further offensive in the direction of Zaporizhia by forces of three BTGr the Polohy.

The Black Sea and Azov operational zones are expected to strike civilian and military targets with cruise missiles from ships of the Black Sea Fleet and the Caspian Flotilla.