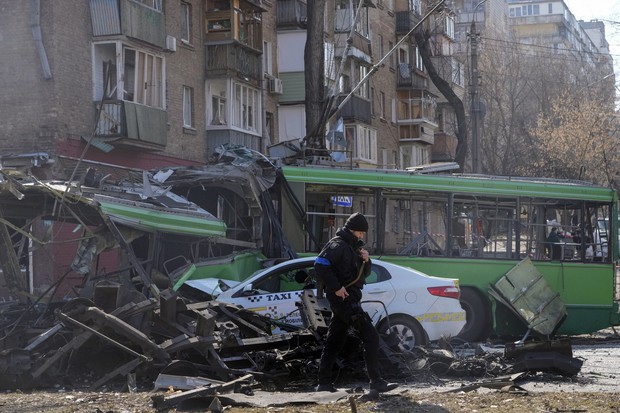 Operational information on the situation in Ukraine as of March 14, 2022 provided by the Ministry of Defense of Ukraine.

The 19th day of the heroic resistance of the Ukrainian people to the Russian military invasion continues.

The enemy continues the offensive operation against Ukraine. Russian forces continues to use aircraft to support ground forces and destroy military and civilian infrastructure in Ukraine. The formation of additional occupation units to conduct hostilities on the territory of Ukraine continues.

According to available information, the enemy plans to strengthen the grouping of troops of the Armed Forces in Kharkiv direction.

The occupying forces continue to launch missile and bomb strikes, shell artillery and tanks of civilian infrastructure and settlements.

In the Volyn direction, there is a high probability of provocations at Belarusian facilities in order to involve the Armed Forces of the Republic of Belarus in the conflict.

Russian enemy does not carry out active offensive actions. It carries out regrouping of troops, improves the logistics system in order to prepare and resume the offensive in the direction of Brovary.

In order to strengthen terrorist groups in the areas of Sumy, Okhtyrka, Kharkiv and Izyum, regroups troops and consolidates on the captured borders. At the same time, there are problems with the supply of ammunition to the firing positions.In order to replenish units of the 6th General Army, conscripts are urged to move to contract service.

In the Avdiivka direction in the area of settlement Kamyanka, during the reconnaissance battle, the occupiers suffered significant losses and were forced to withdraw.

In the Volnovakha direction, the enemy does not stop trying to break through in the direction of Vuhledar.

In the Mariupol direction, the enemy is trying to capture Mariupol. Ukrainian soldiers successfully repulsed the attacks of the invaders. The total losses of the enemy were about 150 people, 2 tanks, 7 infantry fighting vehicles and one armored personnel carrier. After the losses, the occupiers stopped the offensive and retreated.Artillery and aircraft inflicted fire damage on the accumulation of military equipment and enemy columns on the advance routes. According to available information, 12 units of motor vehicles were destroyed as a result of the artillery fire. The battalion also suffered tactical groups from the 336th Separate Marine Brigade and the 11th Separate Assault Brigade.

No signs of preparation for a naval landing operation were found in the Black Sea and Azov operational zones.

We believe in the Armed Forces of Ukraine! Let’s win together! Glory to Ukraine!