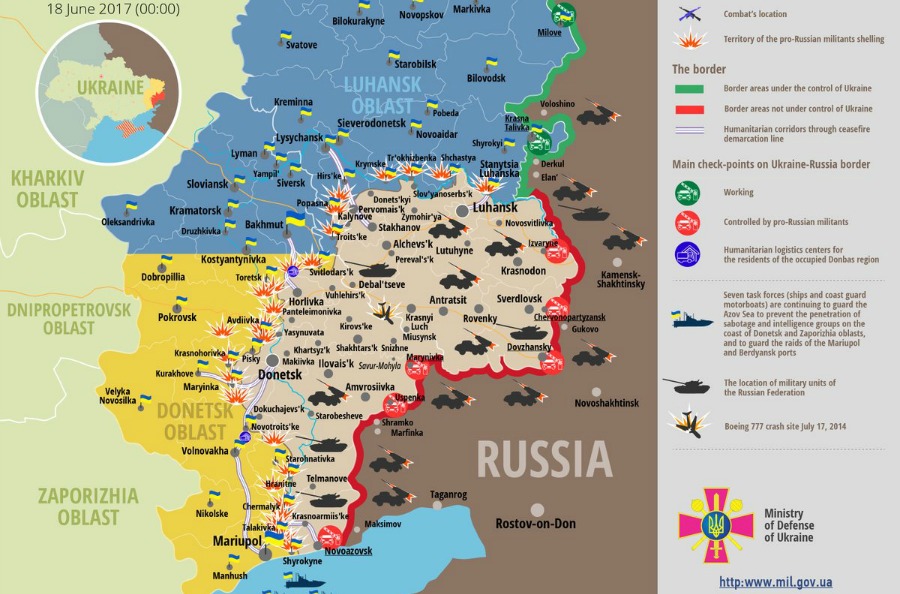 
(2) Luhansk direction: Bahmut road and Popasna area remain the hottest spots on this direction as at least 10 Russian forces attacks with the use of heavy mortar fire, grenade launchers firemachine guns and armored vehicles reported there all day long; Russian shelling also took place near Stanytsya Luganska and Schastya;

(3) Donetsk direction: Russian forces fulfilled massive artillery attack upon Ukrainian troops positions near Avdiivka with the use of heavy weaponry and tanks; at the same time, Russian occupiers released about 20 artilerry rounds upon Ukrainian positions at Svitlodarska line; the enemy used small arms against Ukrainian troops all over the frontline, exept of Donetsk airport;

(4) Mariupol direction: Russian attacks reported in civilian areas nearby the frontline; the village of Berdyanske came under Russian forces fire which resulted damages to several houses; another Russian shellings with the use of heavy artillery and mortar fire reported in Hranitne and Novoselivka Druha;  the enemy’s mortar fire also took place in Shyrokino, while Russian small arms shellings reported over the front direction from Krasnogorivka to the the far south;

(5) No lethal casualties, but 3 Ukrainian servicemen were wounded in actions in the war zone in southeast Ukraine over the last 24 hours.