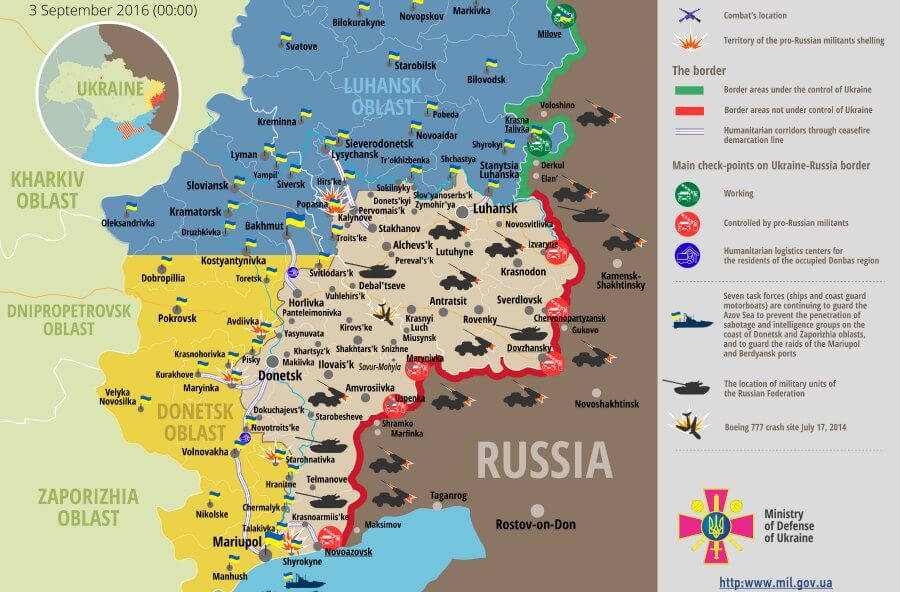 (1) Despite of the recent Minsk agreements, Russian hybrid forces violated ceasefire regime in the war zone in eastern Ukraine 11 times over the last 24 hours. In particular, the enemy opened fire upon Ukrainian troops positions 2 times on Luhansk direction, 1 times on Donetsk direction and 8 times on Mariupol direction;

(4) Mariupol direction: Maryinka, Starognativka, Vodyane and Shyrokine reported as the hottest spots on this direction, where Russian fire was actively used over the last 24 hours; in particular, Russian occupiers fired with grenade launchers and high caliber machine guns in Shyrokine as well as used small arms in  Maryinka, Starognativka and Vodyane; to this end, Russian sniper fire was also spotted in Maryinka;

(5) 1 Russian UAV was spotted over the sky in between Luhansk and Donetsk Oblasts yesterday;

(6) Despite of mentioned above numerous armed provocations from the Russia’s forces side, Ukrainian regular armed forces did not return fire over the last day;