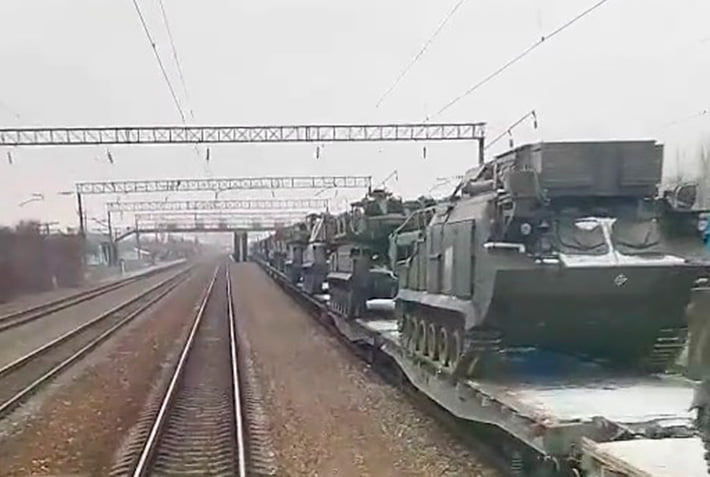 Russian Buk missile battalion of the 49th anti-aircraft brigade was transferred to Voronezh, near Ukraine border, Conflict Intelligence Team reports. Some videos were posted, filmed at Maslovka railway station in the suburbs of Voronezh, Russia.

One video shows many Msta-S self-propelled howitzers, T-80U tanks, a 9A310M1 TELAR vehicle and 9A39M1 TEL vehicle of the Buk-M1 anti-aircraft missile system and 9T229 command vehicles with the KrAZ-255 chassis and 9Ya266 transport containers for missiles.

The other video shows a train carrying other elements of the Buk missile system, including 9S18M1 Kupol target acquisition radar.

This suggests that there is at least one Buk missile system at the railway station (one battalion).  The sidenumbers of the vehicles are painted out.

According to the information we have received, at the moment there are trains at the station that have arrived from Naro-Fominsk (Moscow region), Ilyino (Nizhny Novgorod region) and Krasny Bor (Smolensk region). The 4th Guards Tank Division, the 288th Artillery Brigade and the 49th Anti-Aircraft Brigade respectively are based not far from these stations. All these formations are part of the 1st Guards Tank Army, the arrival of elements of which (in particular, those of the 4th Panzer Division) at Maslovka railway station we and other researchers have observed earlier.

These data allow us to conclude that despite the talks between Biden and Putin, the concentration of Russian troops in the areas bordering the Ukrainian-government controlled territory continues.

Western analysts, in particular Robert Lee, graduate student at the Department of Military Studies at King’s College London, believe that even if the order for an operation in Ukraine is not issued, its threat could persist for at least 2022.