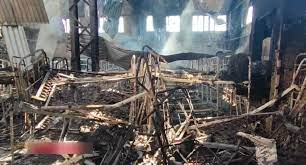 On the territory of the colony attacked by Russia in Olenivka, there were Ukrainian prisoners of war, in particular – from “Azovstal”.

The Armed Forces commented on the shelling of the pre-trial detention center in Olenivka, where Ukrainian prisoners of war are being held.

“The armed forces of the russian federation carried out a targeted artillery shelling of a correctional institution in the settlement of Olenivka, Donetsk oblast, where Ukrainian prisoners were also held,” the General Staff of the Ukrainian armed forces states.

“In this way, the russian occupiers pursued their criminal goals – to accuse Ukraine of committing ‘war crimes’, as well as to hide the torture of prisoners and executions which they carried out there.”

The Azov Support Service reported that it is finding out the names of the dead and injured as a result of the attack on the colony in Olenivka, where the fighters from the Azov regiment are being held. The International Committee of the Red Cross went to the scene. The Association noted that the shelling took place around 9 a.m., and it was a “carefully planned war crime by Russian troops.”

40 killed and 130 injured in Olenivka after the russian shelling this morning – Prosecutor General office of Ukraine reports.