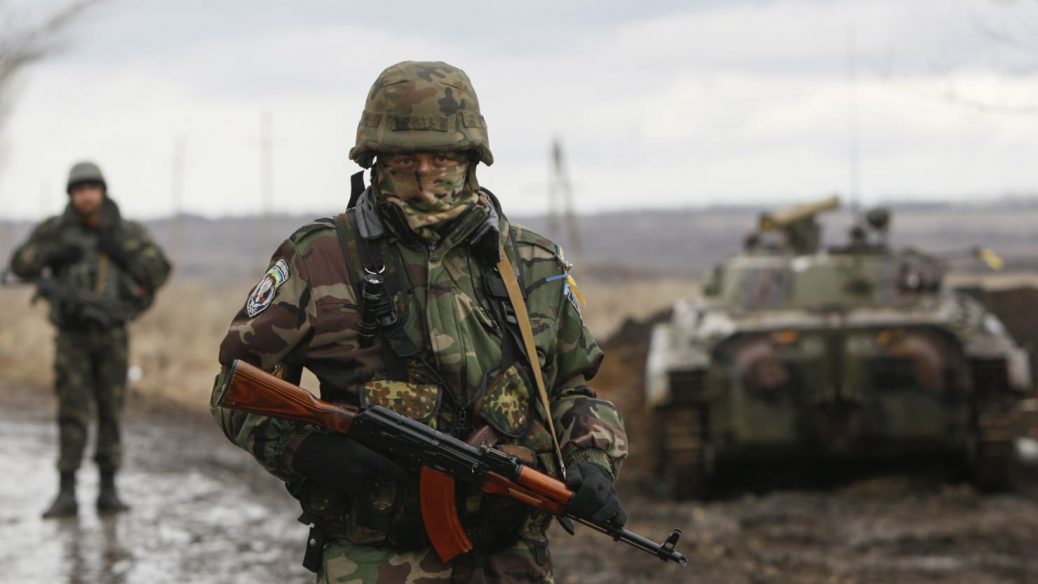 The Russian occupation forces in Donbass continue to break the seize-fire agreements of the “Easter Truce”, shelling the positions of Ukrainian troops and settlements along the contact line, using heavy weapons (120-mm mortars). At the same time, the enemy continues to regroup  its forces at several parts of the front line.

Thus, the invaders continue to strengthen their positions south of Styla. At the altitude of 206.9 there is an appearance of up to 5 units of the new BMP-1, the same amount of BMP-1 is spotted south of the White Kamenka. Trucks are being dug in and masked. There are one MT-LB and two Urals with a troops to the west of Novolapa area, also, there’s a hidden position – ZU-23-2.

There are 10 T-72 and 4 Ural tanks to the south of Mospino. South-east of Lugansk, towards Khryashchavaty, there was a column of tanks and armored vehicles: eight T-64 and T-72 tanks, up to 10 BMM (BMP-1 \ 2 and MT-LB). Also, there are 6 armored vehicles of the Ural and Kamaz types in the convoy. There were the KSHMs and the mobile maintenance units spotted in the military convoy.

According to the source, Russian private military companies operating on the Donbass have received an order from the Russian Armed Forces to intensify the sabotage operations on the Ukraine controlled territories along the front line and to increase the number of local residents / conscripts (the Ukraine citizenship holders) in their ranks. There is also some work underway to involve the so-called “illegal armed formations” (RVF) in the ranks.

“LPR” and “DPR” use the persons who are fluent in Ukrainian for further advancing through the Western media a theses that “the Ukrainians are present on both sides of the conflict”, which, according to the plans of the Russian General Staff, must confirm the “fact of the Civil War in Ukraine”.

The ex-leader of the militants, Mr. Khodakovsky, published a devastating video that shows his “political struggle” with Mr. Zakharchenko, uncovers current poor / inadequate state of the second line of defense along the DAP-YABP line {!! Provide a short explanation of what it is}. More precisely, it showed a total lack of any defense on a stretch Spartak – Putilovka, and the north-western suburbs of Donetsk.

A number of the commanding officers of the occupation units fled under the protection of the “MGB of the DPR” [ministry of interior of “donetsk people republic”]; and the curators from the FSB of the Russian Federation in this structure with the requirement to “give an estimation” to the actions of A. Khodakovsky.

Regarding the “removing border with the DPR” and, thus, creating the prerequisites for uniting the two occupation zones in Donbass (“LPR” – “DPR”) into one”, a statement made by Mr. Pasechnik that idea was not met with enthusiasm by the officials, Law enforcement officers, representatives of “special services” and, in part, businesses in both zones of the fake “republics”. This reaction is due to the fact that the current presence of the “border” between “DPR” and “LPR” has created conditions for the thriving smuggling schemes, that benefit representatives on both of the “border”. In addition, LPR is afraid that in the event of a merger, all corruption schemes involving the siphoning of “help” from the Russian Federation and “protecting” businesses will move under control of the DPR officials.

The Russian CJSC Vneshtorgservis, that controls the “nationalized” enterprises in ORDLO, owes 946.3 million rubles for coal supplied to coal mining enterprises of the “DPR”. As a result, there is a shortage of funds for the salaries of the miners, the acquisition of equipment and materials for the extraction of coal, for logistics services, for the coal-processing services, etc. Because of all of that, “Ministry of Coal and Energy of the DNR” has decided to stop the supply of coking coal from ZAO Vneshtorgservis, to repay the existing debt.

There is a complicated situation with the medical care for the population in “DPR” due to the departure of a significant number of medical professionals who did not want to work for a meager salary. As a result, presently there is no more than 50% of qualified medical specialists left in the most of medical institutions controlled by the “DPR”. Medical specialist
– surgeons and traumatologists – left for the Russian Federation, or the territory controlled by Ukraine. All this puts considerable pressure on that category of the medical specialists, who are also forced to provide medical care to militants and Russian mercenaries from the “1 AK DPR “.