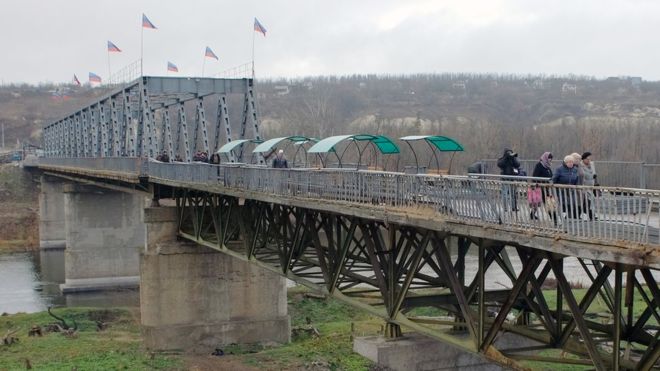 Russian proxies have crossed the recently reconstructed bridge in Stanytsia Luhanska, war zone in eastern Ukraine and are stationed on the government-controlled river-bank.

In fact, this is how the invaders have occupied part of the government-controlled territory.

“LPR representatives in the JCCC” continue to inspect the neutral part of the bridge.

Moreover, they are located not in the center of the bridge, but in the immediate vicinity of its repaired section on the right, “Ukrainian” bank.

Thus, “LPR” have actually moved the boundary line and proceeded some 100 meters towards Ukrainian territory. Now they are symbolically present on the other bank of the Siverskyi Donets.

One can really see people wearing Russian camouflage uniforms and blue “JCCC” helmets near the new section of the bridge. They are watching the flow of people and talking on the radio.

According to civilians who often cross the bridge, monitors from “LPR” may make comments, request some kind of documents and “LPR permits” or prohibit the use of cameras on their part of the bridge.

However, they themselves are taking pictures of Ukrainian journalists on the other part.

This is actually an outpost.

The Ukrainian side appealed to the OSCE Monitoring Mission with a request to influence the situation. However, representatives of the so-called “JCCC from LPR” still remain on the bridge.

The OSCE Special Monitoring Mission (SMM) also confirmed the presence of representatives of “illegal armed groups” on the “neutral” bridge in its recent report.

On December 1, inside the disengagement area near Stanytsia Luhanska (government controlled, 16 km north-east of Luhansk), the SMM saw at least five members of the armed formations (wearing armbands with “JCCC” written on them) between the newly constructed section of the bridge and the checkpoint of the armed formations south of the bridge,” reads one of the reports.