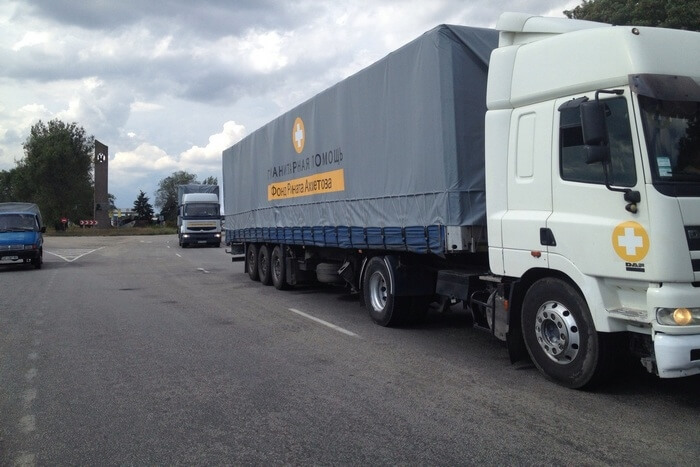 Recently a number of MPs and volunteer battalions servicemen raised the issue of supplying humanitarian aid and trading with Ukraine’s temporary uncontrolled territories in Donbas. EMPR quotes the key concerns and suggestions to address them.

Precondition 1: 22 trucks marked with the “Rinat Akhmetov Fund” signs were stopped on 14 December by the Dnipro-1 battalion at a checkpoint near Kurahove on entry to the occupied territories.

Problem 1: MP Yegor Sobolev at a press briefing says in the trucks of Akhemotv’s Fund indeed were food grain, juices, pasta. However no supporting documents claiming that the cargo was humanitarian. Also no Fund representatives were accompanying the trucks. There was one a woman who presented herself as a staff member of “Brusnychka” chain of stores (owned by Akhmetov) and the head of the chain’s security who at first said that the trucks are of the chain, later when the journalists came he said he was there to simply provide security.

As per MP Sobolev Rinat Akhmetov left the occupied territories however his enterprises continue operating. Donbas Arena in Donetsk is controlled by militants. At the same time “Brusnychka” personnel accompanying Akhmetov Fund’s trucks said the final destination where they were to take their cargo is Donbas Arena. They said what happens next to the cargo they bring there they don’t know.

Precondition 2: At several checkpoints controlled by Donbas battalion near Lysychansk, Sievero-Donetsk alcohol and cigarettes were discovered in the trucks heading to the ATO zone. The goods are owned by several entrepreneurs from Luhansk region.

Problem 2: MP Sobolev called such trade “business on blood”. He mentioned that all trade operations on the occupied territories are controlled by the militants and lead to their enrichment. There are people who are fighting for Ukraine. At the same time cargo is moved from Ukraine’s territory to the country’s occupied territories for those who are killing those defenders, he said.

Sobolev also mentioned that the owner of the goods from one of the stopped trucks – an entrepreneur from Stakhanov was worried about the explanation she would have to give as to the absence of goods (alcohol and cigarettes namely) to the militants in her town.

Donbas battalion commander and MP Semen Semenchenko added that entrepreneurs of the ossupied Stakhanov are giving part of their profit to the militants. Problem 3: Commander and MP Semenchenko outlined the third problematic aspect to be addressed – smuggling of goods from Ukraine’s occupied territories to the rest of the territory of the country. According to Semenchenko main categories of the smuggled goods include gasoline, alcohol, meat, wood, tobacco, some are counterfeit goods coming from Russia. Both militants and corrupt officials benefit from such illegal trade.

The MPs suggest the following solutions to address the above issues.

Solution 1: The MPs suggest to adopt a law prohibiting trade with the occupied territories.

Solution 2: All humanitarian aid coming to the temporary uncontrolled Ukrainian territories must come under the state flag not under the flags of private entrepreneurs, noted Semenchenko. The process needs to be controlled by the state and the International Committee of the Red Cross. Semenchenko also suggested that the list of people in need shall be compiled on occupied territories. MP Taras Pastukh casts a suggestion that the contingent of the Joint Control and Coordination Center working in Debaltseve could be increased for them to control the distribution of humanitarian aid in smaller settlements on occupied territories to ensure the products indeed reach civilian population and not militants.
Solution 3: To identify the sources for products supplies to the supermarket chains in Donetsk and other settlement on occupied territories.

Solution 4: To halt the trade with the occupied territories immediately based on the Law on combating terrorism, MP Semenchenko suggested.

Along with the concerns raised there’s a hope for a reasonable solution to be found in the struggle to balance between the moral aspects of trading and supplying humanitarian aid to Ukraine’s temporary uncontrolled territories in Donbas and the civilians’ needs.