Home » The first evacuees from Mariupol arrived in Zaporizhzhia

The first evacuees from Mariupol arrived in Zaporizhzhia 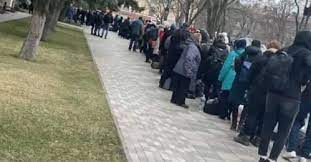 In the evening of March 14, the first residents of Mariupol who had managed to leave the city by car through the “green corridor” arrived in Zaporizhzhia.

This was reported by Zaporizhzhia regional military administration.

Hub specialists, volunteers, representatives of social services, and a psychologist meet asylum seekers at the regional humanitarian headquarters. People are immediately given all the necessary help. They will be provided with  safe shelter and food.

About 300 people in more than 160 cars managed to come from Mariupol to Zaporizhzhia. After registering at the humanitarian headquarters, they were placed for the night in one of the city’s educational institutions converted for the reception of IDPs, Radio Svoboda reports.

Today, March 15, two thousand of private cars with evacuated people left Mariupol. They are moving to Zaporizhia via Mangush, Berdyansk, Tokmak and Vasylivka. 2,000 more cars are parked at the exit from the city, according to the Mariupol City Council.

For personal safety, the head of the regional administration recommends to delete messengers and photos from the phone, as well as to arrive in Vasylivka no later than 18:00 p.m.
People who do not have time yet are recommended to find a safe place and spend the night in Berdyansk or Tokmak cities.

For the past two weeks, people have no electricity, water, gas, communications, or food in Mariupol. It is now known about 2,187 dead Mariupol residents. The humanitarian convoy moved to Mariupol, which was surrounded by invaders, on March 12, 2022 and traveled for three days, moving only during the day.