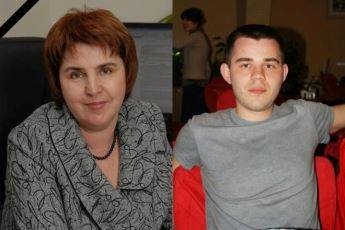 Yuriy Butusov: “The young man on the right is one of Ukraine’s many heroes. His name Olekisy Tyshchuk, a fighter with the 93rd mechanized brigade, which was defending Donetsk Airport. On the left is his mother, Dnipropetrovsk appeals court judge Iryna Tyshchuk. She never tried to get her son out of his military “duty,” and he never asked her to do so“.

On September 28, the APC in which Oleksiy was had a direct hit from a Russian shell and went up in flames. Oleksiy did not make it.

On September 30, Iryna Tyshchuk killed herself.

It’s 6 in the morning and I can’t sleep. I just don’t know how this is happening. These are nof “fascists” or “banderites” or “Right Sector” folks. A well-brought up, intelligent family of Russian speakers. Now they are no more. They died because the guy in the Kremlin wanted to play a game of “Risk,” to launch a war and to kill thousands of people.