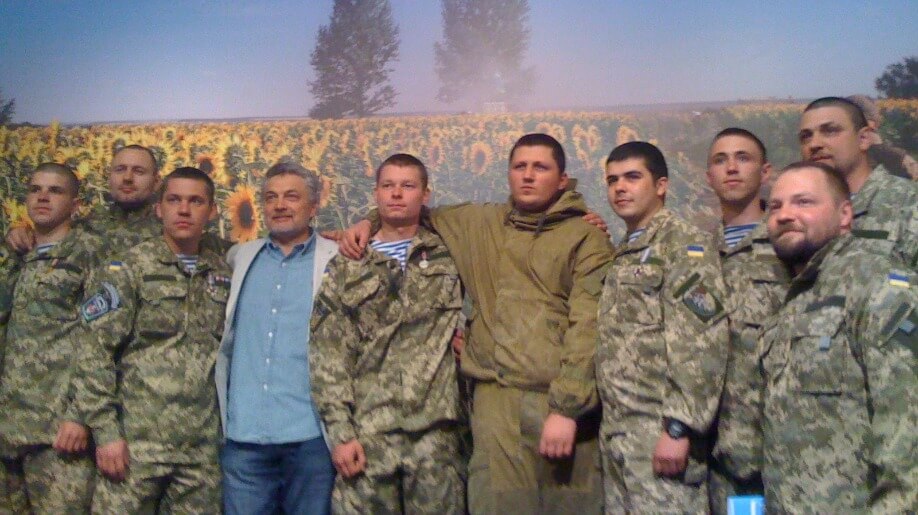 LA Times photographer and acclaimed war photo correspondent Loiko was present at the opening together with a dozen of Ukrainian Cyborgs – courageous airport defenders captured in his photos.

Last fall Loiko spent four days and three nights alongside the Ukrainian servicemen at the airport – theatre of one of the fiercest battles at the time. The photos report the “war routines” of servicemen ranging from the moments in which the Cyborgs are sleeping, having a smoke, gathering at the table or just standing against the ruined parts of the airport to the dramatic episodes when they collect remains of their brother-in-arms into a wooden box.

“I hate wars and I hate this war that was not supposed to ever happen,” said Sergei Loiko at the opening ceremony. “I was brought up on the Soviet myths of heroism. At the Donetsk airport I saw true patriotism and heroism in action,” the photographer said.

“Would you be able to guess where I am on the photos?” asks with a smile Oleksiy Matlak of the 74th Reconnaissance Battalion of Ukrainian Armed Forces. It does not take us long to spot him in one of the photos in a helmet with a rifle standing in what appears to be the new terminal’s ground floor. Euromaidan activist, he signed up for military service as a volunteer. “I don’t want to give a single part of Ukrainian land to Russian occupants and local collaborationists. I will keep fighting regardless of whether I stay alive or not,” Oleksiy says in a sincerely casual tone. “Donetsk airport is an example of Ukrainian army’s strength. Russia will not be able to break Ukraine and Ukrainians,” he adds.

Mykhailo Kucherenko, soldier of the 74th Separate Reconnaissance Battalion of Ukrainian Armed Forces says by the time he was sent to the airport it had already become a legend and majority of servicemen felt it was crucial to be there. However “first of all we had to win the battle not for the territory but for the hearts and minds,” he adds.

Sergey Arkhangelsky, Head of the medical service of the 2nd battalion within the 95th Airborne Brigade said the time he spent at the Donetsk airport – 25 days in total, were the best days of his life. “When you get children’s drawings it gives you hope and adds to your courage, because you know you’re not alone and we felt it back at the airport. We knew Ukraine stands behind us.” He also called to not forget those who were not back from the battle.

Sergei Loiko’s “Airport” exhibition is on till 4 May at the UCMC International Media and Art Lounge at Ukrainian House (2 Khreshatyk). The photos are also available for purchase within the “silent auction” initiative. All money raised is to be directed to help wounded servicemen.