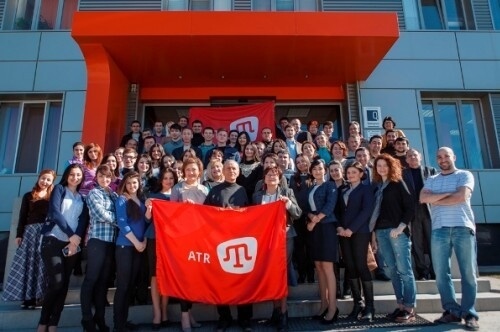 Statement of ATR Deputy Director General on Information Policy Lilya Budzhurova in respect of the police raid on ATR channel in Simferopol.

“Right now special police forces are at the territory of our channel, particularly the representatives of the Investigation Committee and the Anti-Extremism Center. We were informed that the aim of the visit of law-enforcement officers(and there are plenty of men including those who are dressed in full combat uniform with weapons and occupying almost all rooms) is to confiscate any information concerning the events on 26 February 2014 when thousands of people including Crimea Tatars were on the rally near the Crimea Parliament. Despite the fact that earlier we sent the information to the Investigation Committee and the Anti-Extremism Center all the information they requested, it is likely that today someone from the top decided to conduct this kind of police action. Obviously, our channel is guilty of covering that rally as all other media. We do not how today’s situation will end. It is likely that they will switch off our servers and other equipment, so ATR, at least for some time and I hope not forever, will not be able to broadcast.

According to the information we have, this action is very likely to have been planned and organized by Crimean authorities. Once in a while, ATR felt pressure, but they never dared to use force against us, because we never violated and don’t violate the law. But it seems that present Crimean authorities don’t like the mere fact the channel they can’t control exists. The authorities don’t like the mere fact THE FIRST AND THE ONLY CRIMEAN TATAR CHANNEL IN THE WORLD exists, the main aim of which is not politics, but preservation and development of the language and culture of [Crimean Tatar] people.

The authorities, apparently, don’t like the mere fact of existing of the channel as one of the main factors of Crimean Tatars’ information presence on the peninsula, of their full-rate return to their Homeland after half-century deportation and difficulties of the first repatriation decades.

I don’t know, how the authorities will dare to look into the eyes of Crimean Tatars after they close the channel, if it’s what they plan. I don’t know how these actions correlate with Russian President Order on rehabilitation of the deported people, including Crimean Tatars. I want to remind about only one statement of Vladimir Putin, which he made on the eve of 70 years from deportation, in Sochi, on 16 May. Putin said that day that the order on rehabilitation
of Crimean Tatars was the basis for progressive development of the people. But I would rather quote: “I do expect
that the order will become the basis for systematic measures, connected with cultural rehabilitation, political rehabilitation, related to creating normal life-sustaining activities, creating conditions for progressive development of Crimean Tatars in their homeland”.

We expected that as well. But local authorities are apparently dissatisfied with these expectations, as well as “cultural rehabilitation”, “normal life-sustaining activities”, “progressive development” which are impossible without unique Crimean Tatar TV channel. By cancelling the meeting of 18 May [the day, when Soviet authorities deported Crimean Tatars from Crimea in 1944], they prohibited Crimean Tatars from crying. And now they apparently want to prohibit them from seeing, hearing and speaking. But we still have the right to live in our native land, and nobody will ever take this right from us. And while we are alive, we will use all legal means to fight for Crimean Tatars national TV channel. That’s why we don’t bid farewell, we are looking at the course of events and further actions of local authorities, which, I hope, realize the extent of the damage they are making not only to Crimean Tatars, but also to
their own reputation, as well as to reputation of the Federal Authorities.

To remind, today, on 26 Jnauary, in the morning special police units raided ATR channel premises in Simferopol. The ransack is ongoing.

OSCE has already made a statement on the situation saying that “raid on ATR television channel in Crimea unacceptable” marks “a clear intrusion of media’s independence”.