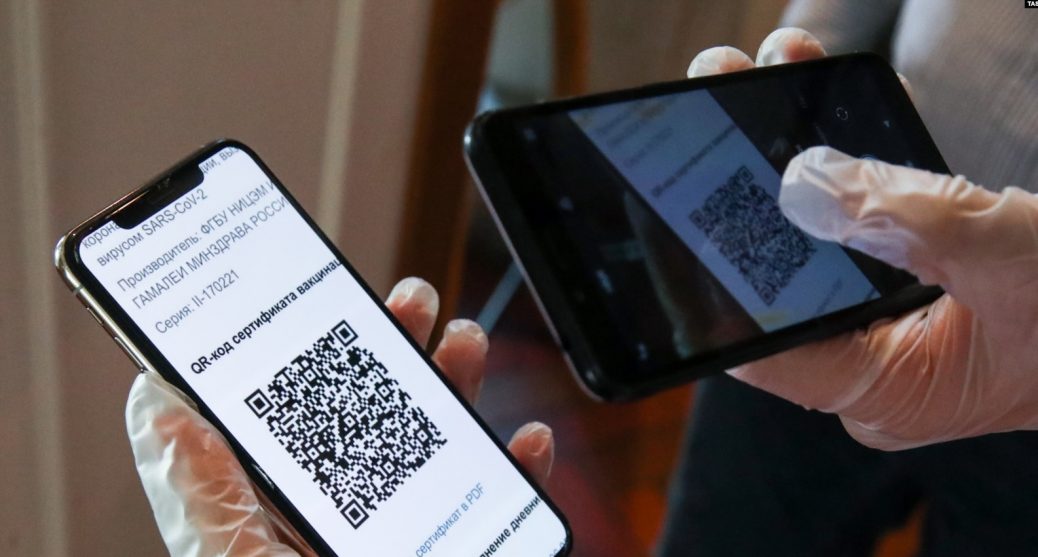 The Russian government is preparing to pass bills on QR codes showing vaccination or recovery for access to a range of public places and transport. In the annexed Crimea, Moscow-controlled officials are actively supporting the initiative. But many residents of Crimea hold protests against QR codes, reflecting “the growth of public outrage.”

QR codes began to be used in Crimea in the autumn during the outbreak of coronavirus. They are assigned to citizens who have recently had a coronavirus or have received two doses of the Russian vaccine. QR codes allow such people to use public transport, go to work, to cafes, theaters and other public gathering places.

The authorities have sent people without such codes to a lockdown, reserving the right to suspend them from work.

Initially, these measures were used to curb the coronavirus spread and accelerate the pace of vaccination. Now the Russian government has decided to legislate such QR codes. It has submitted two bills on QR codes to the State Duma. One bill defines the rules of restrictions for visiting public places, and the other provides for the possibility to require a QR code from passengers on airplanes, trains and intercity buses.

In November, Sevastopol residents addressed a letter to Russian President Vladimir Putin, claiming that QR codes threaten their families and calling them “a direct violation of constitutional rights and freedoms” and ” an offence to human dignity to human dignity.”

Crimean entrepreneurs are also against QR codes. They are publicly asking the authorities to review the policy of coronavirus-related restrictions and are reporting the threat of bankruptcy.

These statements are confirmed by Svetlana Luzhetskaya, Russian Ombudsman for the Rights of Entrepreneurs. If severe restrictions are imposed in Crimea, almost half of private enterprises will be forced to lay off their employees, and some will have to shut down, she told local media.

Meanwhile  the Public Chamber of Crimea approved  the Russian bills on QR codes, calling them “relevant, necessary and justified in the context of the spread of coronavirus, a dangerous sanitary and epidemiological situation and a high degree of threat to human health and life.”