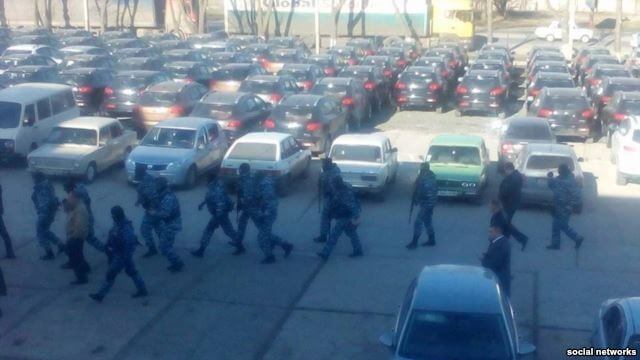 ATR TV channel employees inform the aim of the ransack is to seize computer server, where video materials are stored, in particular – footage of the mass Crimean Tatars rally at the Crimean Parliament on 26 February 2014, when several thousand Crimean Tatars expressed their support of Ukraine.

According to 15minut.org, the ransack has been ongoing for more than 4 hours already.

ATR channel audience started gathering near the building to support the channel.

According to the latest information of krymr.org, channel’s analog signal has been turned off and server with the whole video archive seized. The ransack is ongoing.

ATR channel employees are ready to stay in the office the whole night long.

Deputy Director General on Information Policy Lilya Budzhurova made a statement with regard to the situation, saying that authorities want to prohibit Crimean Tatars from ‘seeing, hearing and speaking’.

Refat Chubarov – Chairman of Crimean Tatars Mejlis – claims that the only aim of ransacking is to destroy the channel.

To remind, ATR channel is the only Crimean Tatars channel in the world and the only opposition channel in Crimea.