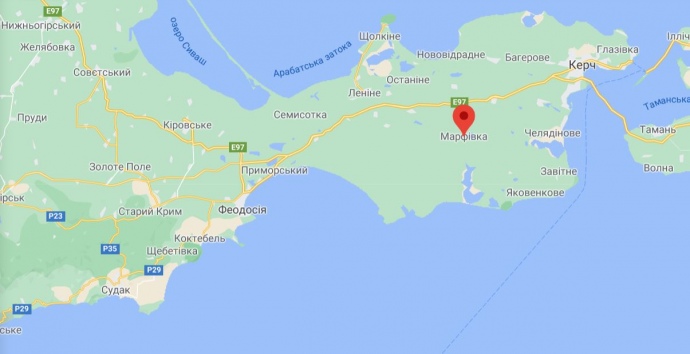 Satellite photos of Russian military camp at military polygon on the South of Kerch peninsula was published by Der Spiegel edition.

Polygon is situated near the Marfivka, a small town on the Kerch peninsula. Information is also confirmed by an independent CIT – Conflict Intelligence  Team. The military camp has appeared in the period of March 15 to April 2.

Based on the information which states the destination site of the trains carrying military equipment and photos of a military convoy in Crimea, most likely these are parts of 58 Army moved from North Caucasus (e.g. 136 Motor Rifle and 291 artillery Brigades). On April 15 the press office of the South Military Region confirmed the information concerning the relocation of parts of the 58th Army to Crimea.

According to the press office of the Ministry of Defence of Russia Federation, the objective of such relocation is military training.

However, there was no official comment on the presence of the 76 assault landing Division from Pskov in Crimea. Its trains were unloading in Simferopol, not in Kerch peninsula. Moreover, one of them was noticed much closer to the board of the Kherson region of Ukraine.

CIT draws attention to the fact that on the April 13 satellite photos one can observe residence buildings, as well as more than one thousand military equipment placed in raws at the closed territory.

On the camp photos, one can not see heavy military equipment such as tanks and self-propelled artillery guns “MSTA-C”, which were relocated to Crimea together with parts of the 58th Army. This allows assuming that this is not the only camp of the forces, relocated from North Caucasus. Russian occupation forces have built tremendous military camp which consists of two parts: the main one and the additional one.