Home » Radioactive fire in the Chornobyl exclusion zone is getting worse

Radioactive fire in the Chornobyl exclusion zone is getting worse 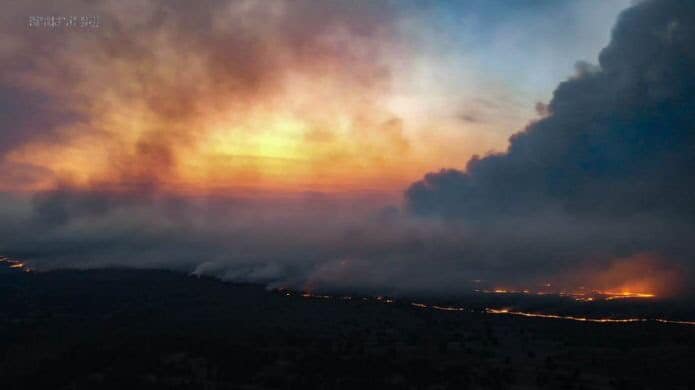 The fire has moved to the left bank of the Pripyat river and is getting closer to the Chernobyl nuclear power plant.

Fire in the Chernobyl Exclusion Zone is getting worse. It cannot be put out since April 4.

This was written by Natalia Dehtyarenko, a spokeswoman for the NNEGC Energoatom.

According to Dehtyarenko, the territories of the former villages of Leliv, Kopachi, Poliske, Hrezlya, Rudnya-Hrezlyanska, Kovshylivka, Varovychi, Buda-Varovychi, Martynovychi, Smarahdovy, Volkhov and Chystohalivka have burned down. The territory of the Red Forest and the closed military town of Chernobyl-2 have also been destroyed by fire. The city of Chernobyl has suffered too. By the time the post was written, the fire was approaching the village of Koshivka.

Dehtyarenko demanded that the State Agency on Exclusion Zone Management, the State Emergency Service and the police explain how the fire could spread to the other side of Pripyat, whose width is 50-70 meters in the middle reaches. In her opinion, this is nothing but a deliberate arson.
She also accused the authorities of lying and downplaying the scale of the fire, which was allegedly controlled.
A video appeared on the Internet, taken from a shelter near the Chernobyl nuclear power plant, which confirms the words of Ms. Dehtyarenko. The video proves that the fire is getting closer and closer to the nuclear power plant.
Meanwhile, at about 10 pm, the State Agency on Exclusion Zone Management published a statement on Facebook that there were no fires on the left bank of the Pripyat.

The ministry assured that as of 8 pm on Sunday, April 12, measures to eliminate fire were continuing in the exclusion zone, and fires on the left bank of the Pripyat were not recorded.
According to the press service of the State Agency, there is only smoldering of forest cover in separate places in many of the villages mentioned by Dehtyarenko and the main fires are located in the vicinity of the villages of Varovychi and Chystohalivka.