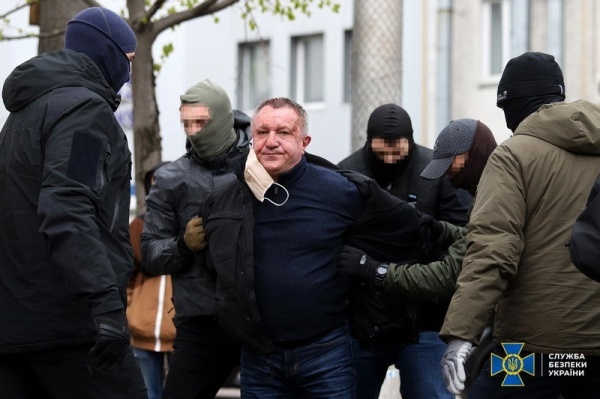 General of the Security Service of Ukraine, Valeriy Shaytanov was arrested on April 14 as “Russian agent” and is suspected of state treason and organization of terrorist attacks.

According to the SSU, counterintelligence of the Security Service ascertained in the course of long and large-scale special operations that SBU General Shaytanov had been an agent of Russia’s FSB and passed classified information to the Russian party, including on SSU special operations in Donbas,for a reward and citizenship of the Russian Federation.
In addition, Valeriy Shaytanov had to organize the killing of ATO volunteer Adam Osmayev at the request of the FSB.
According to the SSU, the evidence is solid – up to photos of meetings and recordings of General Shaitanov’s conversations with his FSB curator from Russia.
The head of the Security Service of Ukraine called the operation of unmasking and detaining Valeriy Shaytanov “SBU’scrucial operation.”
The pre-trial investigation is ongoing.
The exposure and detention of SSU General Valeriy Shaytanovon suspicion ofstate treason is probably only a tip of an iceberg, as Viktor Yahun, Deputy Head of the SBU in 2014-2015,commented on ICTV Facts.
According to Yahun, Shaytanov is far from being the only Russian special services agent who could work for the Russian aggressor, as the Russian FSB had been planting its hidden agents into Ukrainian special services for decades. Those Russian agents in the SBU could be exposed if Shaytanov had not been detained so publicly, Yahun believes.
“The purpose of any special service is to document the human sources and disclose the spy network rather than detain an agent who has already burned,” said Viktor Yahun.