Home » Zelenskyy on a large-scale exchange: Both Putin and I did everything we promised

Zelenskyy on a large-scale exchange: Both Putin and I did everything we promised 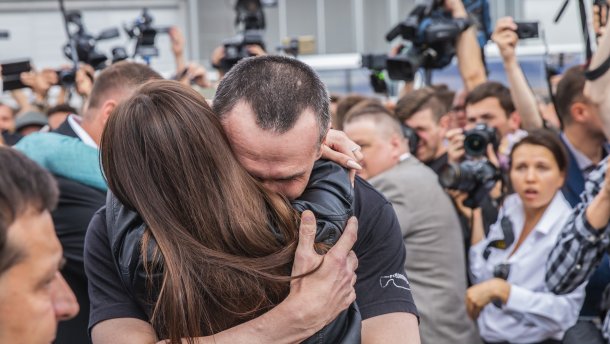 A major 35 to 35 prisoner exchange between Ukraine and Russia took place on September 7, 2019.

Russia has released 24 sailors captured in November 2018 near Kerch.

5. Bohdan Holovash, graduate of the Institute of Naval Forces.

12. Vladyslav Kostyshyn, graduate of the Institute of Naval Forces.

20. Volodymyr Lisovyi, commander of the 31st division of supply vessels.

There are also political prisoners on the exchange list:

As part of a large-scale exchange, Ukraine will extradite 35 people to Russia: 11 of them have been pardoned; preventive measures have been revoked for 19 persons; two have already been released; one was transferred to the Russian side earlier

President Volodymyr Zelenskyy declares that his agreements with Russian President Vladimir Putin have been fully implemented by both parties.

… The formula was saved. These were our arrangements. At first, we discussed the return of our sailors, but then we began a dialogue. I am very glad that it was our proposal for a different format, which provided for the return of our political prisoners as well.

It was a secret because we knew that not everyone wanted the return,” Zelenskyy said.

President also informed about his telephone conversation with Putin on August 7, during which they agreed on the first stage “to unblock our dialogue and on the first step to stop the war: the release of our servicemen, our hostages, our sailors, our territories.”

According to him, negotiations will continue.