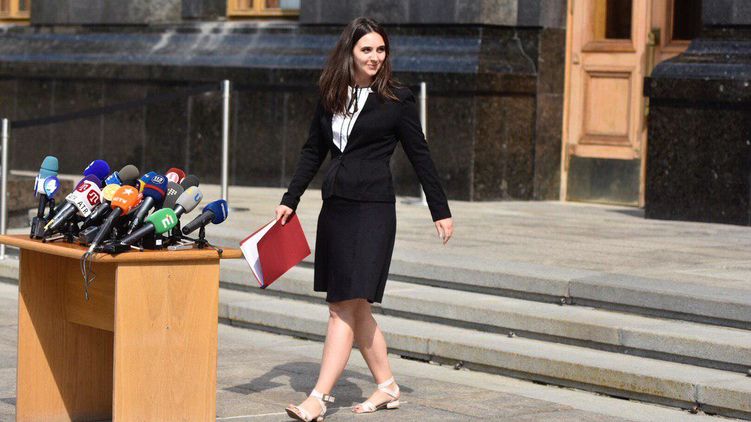 Zelensky’s spokesperson applied for the position and had her works published in NYT for a month. The US claims the conflict of interests

The New York Times published at least three Mendel’s materials in May.

In May, The New York Times wrote about a conflict of interest faced by former US Vice President Joe Biden in connection with his involvement in an attempt to oust the Ukrainian prosecutor general, Yuriy Lutsenko. Just a month later, the newspaper itself was involved in a conflict of interest.

It is noted that on Monday, June 3, after a widely criticized article by Yulia Mendel’s co-author, she announced that Zelensky had appointed his spokesperson who would join the Ukrainian government as the presidential press secretary.

This announcement triggered a new wave of dissatisfaction with The New York Times. Critics ask whether there was a conflict of interest when Mendel published her material about Biden, CNN reports. She also published another article on Ukrainian politics on May 20.

The New York Times representative Arí Isaacman Bevacqua told CNN that it was only the previous week that the newspaper learned that Mendel had filed an application for the position of the President of Ukraine’s spokesperson.

“Ms. Mendel wrote a story to the Times in May, when she was a government candidate, on dissolution of parliament. If she had informed the editors about her application, they would not have given her this job and we would have stopped working with her immediately, given this serious conflict of interest,” she said.

Bevacqua added, however, that the editors are sure that despite the conflict, Mendel’s reports, including the controversial story of Biden on May 1,”were honest and accurate.”

The Times said the allies of President Donald Trump, especially his lawyer, Rudy Giuliani, pushed a suggestion that Biden was acting unduly. “But only in the 19th paragraph The Times noted that there was no evidence supporting an assertion that Biden deliberately had tried to help his son by insisting on ousting the prosecutor,” CNN emphasizes.

Biden’s spokeswoman, Keith Bedingfield, told The New York Times that the dismissal of the Prosecutor General of Ukraine was supported by US institutions, in particular the World Bank.

Mendel wrote another story to The New York Times, published May 19, about Ukraine’s struggle with sexual violence among the military, however, according to Bevacqua, although it was published in May, the article was “approved earlier”.

As reported, Yulia Mendel, 32, was appointed spokesperson by the decree of President of Ukraine Volodymyr Zelenskyi on June 3.

She previously worked on ICTV, Espresso TV and Inter. For several years, she collaborates with The New York Times as a journalist. She wrote for Ukrainian Forbes and American Politico.