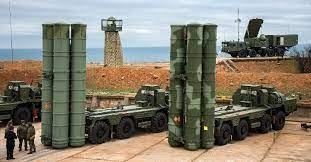 Russian occupiers are building up the air defense system in Belarus in the border areas with Ukraine, the General Staff of the Armed Forces of Ukraine says.

The Russian invaders continue to conduct a full-scale armed aggression against our state. According to available information, the enemy intends on surrounding the grouping of the Joint Forces and accessing the administrative borders of Luhansk and Donetsk regions.

In order to constrain the actions of our troops, the enemy will continue to hold separate lines in the temporarily occupied territories of Kyiv and Chernihiv regions, probably in areas in the immediate vicinity of the Ukrainian border (with the Republic of Belarus and the Russian Federation).

In the Volyn direction, there are no signs of the formation of offensive groups by the Russian enemy. Intensified operational and combat training measures are being carried out in the units of the Armed Forces of the republic of Belarus. The enemy is building up the air defense system in the border areas with our state.

In the Polissia direction, the enemy continues to move some units to the territory of the Republic of Belarus. In order to slow down the advance of our units, the Russian occupiers are mining abandoned positions, deployment routes, elements of transport infrastructure and equipment that cannot be evacuated.

In the Siversky direction, the enemy continues to hold separate units of the 41st Army to blockade the city of Chernihiv. According to available information, the main part of Russian occupiers’ group is already concentrated on leaving for the territory of the Russian Federation.

A part of the units of the 2nd All-Military Army was withdrawn from the Brovary direction to the territory of the Kursk region of the Russian Federation. Other units are ready to move towards the Russian border.

In the Slobozhansky direction, the enemy continues to blockade Kharkiv. It is trying to continue the offensive in the Izium direction.

In the Donetsk direction, the enemy is concentrating its main efforts on taking the settlements of Rubizhne, Siverodonetsk, Popasna, Troitske, Avdiivka, Marinka, and Krasnohorivka under control. The enemy is trying to take the city of Mariupol under full control.

In the South Bug direction, the enemy is carrying out assault operations in order to reach the administrative borders of the Kherson region.

As part of the Russian occupying forces up to 75 BTGs were involved in combat missions on the territory of Ukraine, up to 34 BTGs are on recovery, and 16 BTGs are completely destroyed (information is being specified).